The U.S. military carried out an airstrike in Somalia against al-Qaeda-linked terror group al-Shabaab, U.S. officials said on Monday, as reported by Reuters. Officials did not specify whether it was a drone strike, and the Pentagon has not disclosed any additional information about the strike. The U.S. has been drone-striking Somalia for some time now, a policy Barack Obama escalated.

As is usually the case, the media reports these developments without questioning the underlying narrative, and millions of ordinary Americans go about their day without so much as batting an eyelid. Just another day in Africa, right?

However, even Reuters acknowledged that al-Shabaab has been pushed out of Mogadishu, Somalia’s capital city, and has lost control of most of the country’s cities and towns. Further, according to the Guardian, al-Shabaab has never been implicated in any plots to strike the U.S. or Europe.

So why is this group a concern for the United States? Is it simply because they are aligned with al-Qaeda?

Consider this passage from the Intercept’s Glenn Greenwald from March of last year:

“Since 2001, the U.S. government has legally justified its we-bomb-wherever-we-want approach by pointing to the 2001 Authorization for Use of Military Force (AUMF), enacted by Congress in the wake of 9/11 to authorize the targeting of al Qaeda and ‘affiliated’ forces. But al Shabaab did not exist in 2001 and had nothing to do with 9/11. Indeed, the group has not tried to attack the U.S. but instead, as the New York Times’ Charlie Savage noted in 2011, ‘is focused on a parochial insurgency in Somalia.’ As a result, reported Savage, even ‘the [Obama] administration does not consider the United States to be at war with every member of the Shabaab.’”

While we are on the topic, try conducting a Google search on any of the rebel groups currently being supported – and not targeted – by the United States and its allies in Syria. Try to find one that isn’t aligned with al-Qaeda. It’s almost impossible. The only major group in Syria that is currently not backed by al-Qaeda in some way, shape, or form is ISIS.

Somalia was one of the seven countries four-star General Wesley Clark identified years ago as a target of American military intervention following the September 11 attacks in 2001. It is also one of the countries that made it onto Trump’s infamously revised travel ban, which is now being enforced courtesy of the U.S. Supreme Court.

Although under Barack Obama the U.S. was waging a covert war in Somalia rife with drone strikes and Special Forces on the ground, Donald Trump has ramped up this operation alongside a number of other conflicts, particularly in Iraq and Syria. Trump has also approved the deployment of regular U.S. troops to Somalia for the first time since 1994. One of these troops has already been killed in a clash with the terror group.

To put it simply, these American troops are not just advising and training local troops, they are also directly involved in combat missions. As these clashes intensify, expect more American deaths to come, and expect further deployments.

Such deployments will also likely lead increased air strikes because the U.S. argues that such strikes are needed to defend their troops from Islamic militants. However, even the New York Times, an establishment media outlet, can see right through this circular reasoning:

“In its public announcements, the Pentagon sometimes characterizes the operations as ‘self-defense strikes,’ though some analysts have said this rationale has become a self-fulfilling prophecy. It is only because American forces are now being deployed on the front lines in Somalia that they face imminent threats from the Shabab.” [emphasis added]

To recap, the United States essentially identified a group that poses no threat to the United States or Europe and targeted it with drone strikes over the course of Obama’s presidency. As we have seen across the globe, drone strikes actually help turn small insurgent groups into a very formidable forces due to the instability these strikes create and the innocent lives they take. In some instances, drone strikes targeting and eradicating a group’s leaders can actually cause a more violent person to rise up and take control.

Did America’s representatives of so-called democracy ever debate this war in Somalia? What do ordinary Americans even know about Somalia or al-Shabaab? Most Americans probably aren’t even aware that although there is a central government of sorts, the country has been widely regarded as a lawless, failed state. Can the average American point to Somalia on a map?

Indeed, locating Somalia on a world map would aid the reader in understanding the geostrategic importance of such a country.

As Geopolitical Futures has explained:

“Somalia’s northern coast borders the Gulf of Aden, which leads to Bab el-Mandeb, a narrow chokepoint through which all maritime traffic from the Mediterranean Sea to the Indian Ocean must pass. Avoiding this strait would take all goods from the Persian Gulf – including oil – around the entire African continent to reach European and American markets. It is also a valuable staging ground for navies to project power on to the Arabian Peninsula.”

Somalia is so important that Saudi Arabia offered $50 million to its government to break ties with Iran. Not surprisingly, Somalia is now one of the countries assisting Saudi Arabia in its invasion of Yemen, the poorest country in the Arab world.

That being said, Somalia is allegedly a transit point in a supposed weapons route from Iran to Yemen that supplies the Yemeni opposition with weaponry to combat Saudi-led forces in the war-torn country. If the U.S. -backed Saudi-led coalition is unsuccessful in crushing the Yemeni resistance, and if a government is established in Yemen that aligns itself with Tehran, the U.S. could slowly begin to lose strategic maritime position and influence in this vital region.

In this context, Somalia’s proximity to Yemen means the North African nation is one of those strategic maritime areas the U.S. cannot afford to lose.

Somalia is also reportedly sitting on substantial unexploited reserves of oil, as well as about 25 percent of the world’s known uranium reserves.

Somalia’s recently elected president, who was chosen in an election paid for by the U.S. and the E.U., is supportive of American military assistance even though his people are, in most cases, banned from visiting the United States.

Further, as Truthout observes, Somalia is just one of many African locations in which the U.S. military has asserted itself:

“The US Africa Command oversees a vast array of ‘outposts’ — categorized in Pentagon-speak as ‘consisting of two forward operating sites [including the one official base in Djibouti], 13 cooperative security locations, and 31 contingency locations.’ Secret documents in 2015 listed thirty-six outposts ‘scattered across 24 African countries. These include low-profile locations — from Kenya to South Sudan to a shadowy Libyan airfield — that have never previously been mentioned in published reports. Today, according to an AFRICOM spokesperson, the number of these sites has actually swelled to 46, including ’15 enduring locations.’’”

The problem with this region, from the perspective of America’s warmongering class, is the underlying power struggle between the United States and China. China is investing heavily in Africa and has also signaled its intention to build military bases in Africa’s strategic areas. In turn, the U.S. needs to assert itself as much as possible to counter the rise of the Chinese presence in Africa. China has invested over $200 billion in Africa to date, and Somalia regards China as a “vital ally.”

In another example, China is already using large investments to squeeze the U.S. out of Pakistan, a former U.S. client state. While there is much to be made of China’s intentions and its actions, there is a noticeable difference in that currently, China opts for alternative ways of spreading its influence — as opposed to relentlessly bombing nations into submission.

To some countries, China might be a breath of fresh air in comparison to its American counterpart. 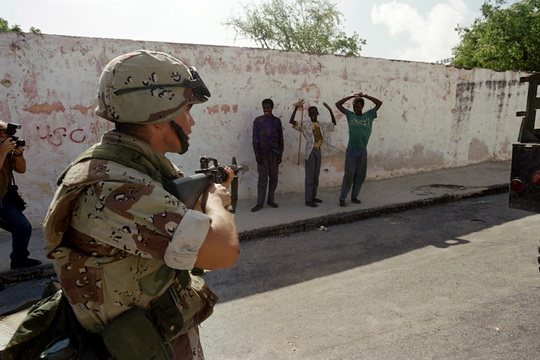