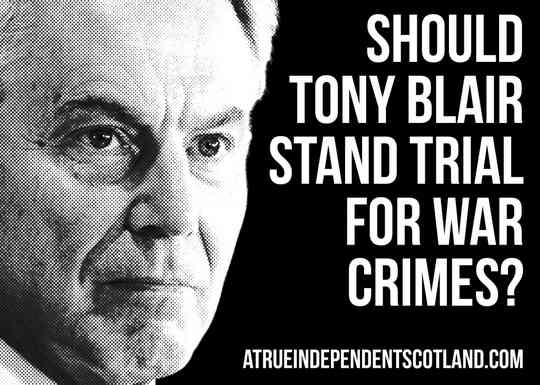 The individual is handicapped by coming face to face with a conspiracy so monstrous he cannot believe it exists.”  (J.Edgar Hoover, 1895—1972.)

Did the Government believe the claims about Saddam Hussein’s weapons of mass destruction or was the aim regime change, which has no basis whatsoever in international law? Was this the real motivation? Secondly, when was the decision taken to go to war? Was it at Crawford or Camp David, in April 2002, (Lord Morris of Aberavon, House of Lords, October 22, 2015

”Why did Tony Blair have those embarrassing exchanges in 2002 [with G.W. Bush] when there was no question of there being any declaration of war?  Why did the then Government ignore the instinct and feelings of 1.5 million people marching down Piccadilly to protest about what was still an illegal war?” (Lord Dykes, House of Lords, October 22, 2015)

Just five days after it was revealed (1) that former British Prime Minster Tony Blair and then President George W. Bush had made a pact to attack Iraq and overthrow the country’s sovereign government a full year before the invasion took place – as Blair continued to mislead government and populace stating that diplomacy was being pursued and no decisions made – another snake has slithered from under the hay (as the Arab saying goes) in the form of  Sir Jeremy Heywood.

Sir Jeremy who has been unkindly dubbed “Sir Cover Up” by sections of the media is Prime Minister David Cameron’s Cabinet Secretary, thus the UK’s top Civil Servant.

According to the Daily Mail, Sir Jeremy has: “insisted he did not deserve his reputation as the secretive and manipulative power behind the throne” and was “frustrated” at his public portrayal.

“Sources close to the Iraq Inquiry claim it was held up for months while chairman Sir John Chilcot argued with Sir Jeremy about which documents could be put in the public domain.

“In the end, Sir Jeremy insisted that 150 messages between Tony Blair and George Bush in the run-up to the 2003 war must be censored. Only the ‘gists’ of the messages and selected quotes will be released. (Emphasis mine.)

“Former Shadow Home Secretary David Davis said it was ‘wholly inappropriate’ that Sir Jeremy had been involved in decisions on the Iraq Inquiry, given his role as Mr. Blair’s Private Secretary at the time of the war.” (2)

Sir Jeremy was Principal Private Secretary to Tony Blair from June 1999 to July 2003 and would thus have been party to every step of the scheming and untruths about the invasion and surely the plotting between Bush and Blair to attack, during their April 2002, three day meeting at the Bush ranch in Crawford, Texas. (See 1.) 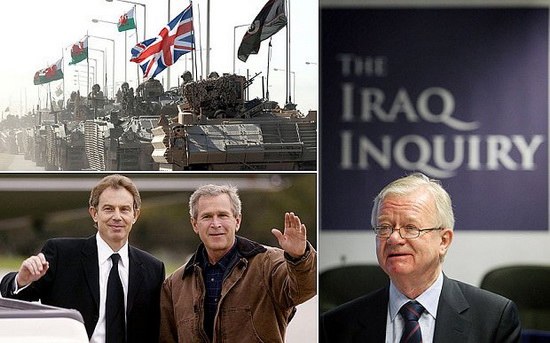 Subsequently Heywood stepped in to the same position when Gordon Brown became Prime Minister after Blair’s resignation, a post he held between January 2008 and May 2010, so would also have been party to the plans for and structure of the Chilcot Inquiry in to the war, which was set up by Brown. Thus those involved in the bloodbath and invasion, convened the Inquiry in to the illegality.

According to Ministry of Defence figures, the total cost of UK military operation in Iraq, 2003—2009, was £8.4 Billion – ongoing since they are back bombing, with Special Forces in Northern Iraq – and it would be unsurprising if also elsewhere in the country, given Britain’s duplicitous track record. To 2013 the cost of UK operations in Afghanistan reached £37 Billion, also ongoing.

David Cameron who voted to attack Iraq told a news programme at the time: “You’ve got to do what you think right, even if it’s unpopular …”, near mirroring Blair’s “I know I’m right” of the same time. Cameron admires Blair, regarding him as a “mentor.” At every level of government past and present, there are vested interests in the truth on Iraq never coming out.

Cameron’s words on his election as Prime Minister come to mind again: “We’re all in it together.”

Of Sir Jeremy, political commentator Peter Oborne has written: “Heywood is a perfect manifestation of everything that has gone so very wrong with the British civil service over the past 15 years.” (3)

House of Lords Debate:  Prelude to a Criminal Indictment of Tony Blair?

On Thursday, 22nd October, in a debate in the House of Lords, Tony Blair’s former Attorney General (May 1997-July 1999) Lord Morris of Aberavon cited the “scandalous delay” in producing the Chilcot Report.

Sir John Chilcot’s Inquiry took evidence between November 2009 and 2nd February 2011. Costing £10 million (and rising) the final Report is now not expected until summer 2016 and maybe even sometime in 2017.

The families and friends of the 179 British service people who died had been “badly let down” by the delays, stated his Lordship. Indeed, but, tragic as the whole Iraq horror is for the UK’s bereaved, their sons, daughters, relatives, signed up to join the armed forces, trained extensively in killing other human beings and had the lawful right, if in conscience they believed it wrong, illegal, to refuse to serve.

In their debate (4) their Lordships devoted no time to the grief of the relatives of the over one million Iraqi dead, the 800,000 Iraqi children who have lost one or both parents, the million widows, the maimed, the limbless, those who lost their minds, homes, all, in the horror, who also are “badly let down”, their need for answers paramount. Only Lord Dykes in just two lines referred to: “ … the fate of Iraqi civilians. That should be a substantial part of this report.”

*“Why was it so important for them to turn on Saddam Hussein if regime change was not the main driver?

*”Why did Tony Blair have those embarrassing exchanges in 2002 when there was no question of there being any declaration of war?

*“Why did the then Government ignore the instinct and feelings of 1.5 million people marching down Piccadilly to protest about what was still an illegal war?
*”Why did the Americans and the British ignore the wise advice of the French Government under President Chirac and Foreign Secretary Dominique de Villepin about the mistake of going to war on that occasion?” 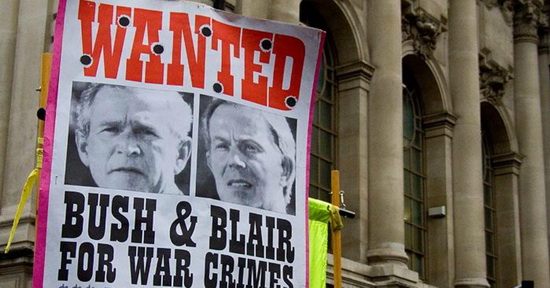 In a surely clear reference to Sir Jeremy Heywood, Lord Morris said that: “ …  the saddest feature of the inquiry process was the ‘strenuous effort’ of the Cabinet Office to block the committee from having access to ‘swathes of vital documentation,’ including notes from Blair to Bush” adding: “ Respect for good governance is undermined if Reports don’t see the light of day before issues become dimmed in public memory.”

Lord Parekh also referred to the “delay” caused by: “the dispute over access to various documents”, Sir Jeremy’s spectre stalked the Chamber:

“For example, it took nearly a year to obtain the Blair-Bush correspondence and the notes Mr Blair is supposed to have left with Mr Bush, to read them and to decide whether to include them in the report.”

Baroness Falkner was surely also referring to Blair and Cameron’s ally, “Sir Cover Up” when she said:

“Looking at the sequencing of events, it is clear that there was some kind of stand-off between the Cabinet Secretary and the Inquiry team, which lasted for a while … it took from July 2012 to January 2015 to reach an agreement on publishing the Blair-Bush correspondence.”

And does that refer to the “censored” version?

Lady Falkner made a vital point regarding David Cameron’s desire to emulate Blair in visiting a full scale “Shock and Awe” on another devastated country which poses Britain no threat and which would be as unlawful as Iraq:

“I want to pick up the issue of our continuing intervention in the Middle East. Let us go back to the August 2013 vote on not intervening in Syria. We as a country cannot, and should not, make a decision on that until we know of our hand in setting that region ablaze in the first instance. That is the least we owe the country.”

Earl Attlee had hands on experience having served as a Territorial Army Officer in Iraq during the Invasion had clearly had enough of prevarications:

“I do not believe that democratic leaders can lead a country to war without being held to account for the decisions that they made on our behalf. I could see the ‘dodgy dossier’ for what it was … “

Baroness Williams was equally scathing, demanding: “ … the truest possible account of this, which I think is the second-gravest mistake ever made in the history of the United Kingdom’s foreign policy after the end of the Second World War.”

Comparing the Iraq disaster to the 1956 Suez crisis in “scale” and “effect”, she stated:

“Today, when we look at what has been tragically not only an attempt to try to invade Iraq but, perhaps more crucially, an attempt to see the Middle East fade away into a situation where there is almost no legally available support, let us not forget that an invasion based on the argument that you need regime change has no place in international law and no place in the United Nations.” (Emphasis mine.)

In context, Suez has been described (5) as: “ … one of the most important and controversial events in British history since the Second World War. Not only did Suez result in deep political and public division in Britain, it also caused international uproar.”

“It has come to be regarded as the end of Britain’s role as one of the world powers and as the beginning of the end for the British Empire.”

Suez led to the downfall of Prime Minister Anthony Eden whom, it was widely believed, had mislead Parliament over the degree of collusion between Britain and Israel.

Tony Blair also mislead Parliament, including over the extent of his collusion with George W. Bush. Ironically he has also been described as: “having an unremitting record of bias toward Israel.” (Electronic Intifada, 29th June 2007.) When he was – Orewellianly – appointed “Middle East Peace Envoy”, he was described as: “A true friend of the State of Israel” by then Prime Minister Ehud Olmert and: “a very well appreciated figure in Israel” by then Foreign Minister Tzipi Livni.

Eden and Blair may have more in common regarding their actions in the Middle East than meet the eye. Eden however simply sunk into obscurity whereas the clamour for Blair to account for his actions grow ever louder. The petition to Parliament for his arrest for war crimes and misleading the nation has nearly reached the required 10,000 when it is mandatory for the Prime Minister to respond. At 100,000 a Parliamentary debate can be called.

The Leader of the Labour Party, Jeremy Corbyn told BBC Newsnight that Blair could see a war crimes trial over the: “illegal Iraq invasion.”

www.arrestblair.org established by journalist George Monbiot: “offers a reward to people attempting a peaceful citizen’s arrest of the former Prime Minister, Tony Blair, for crimes against the peace.” So far five credible attempts have been made and around £13,000 paid out.

As events are unfolding there may soon be no more wriggle room for all those involved in the lies and cover ups. Their Nuremberg may yet await. It is owed to those who lost their lives for a pack of lies. For the people of Iraq it is a sacred accounting, a debt of ultimate honour and a woefully inadequate apology which might at least demand reparations...