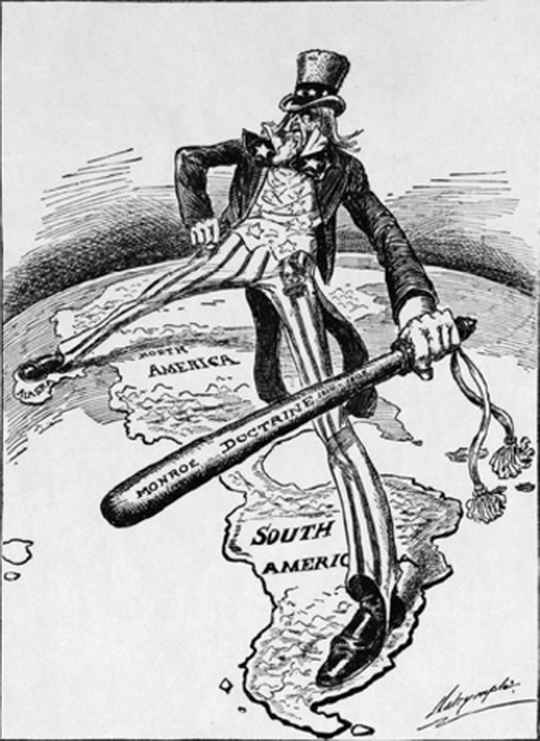 “Today, we proudly proclaim for all to hear: the Monroe Doctrine is alive and well,” US national security advisor John Bolton declared last week in Florida. This was only one of an increasing number of public invocations by Trump administration officials of this nearly two-century-old canon of Washington’s foreign policy in the Western Hemisphere.

Bolton’s audience consisted of a gathering to mark the 58th anniversary of the 1961 Bay of Pigs invasion, an abortive attempt mounted by the CIA using Cuban counterrevolutionaries and mercenaries to overthrow the government of Fidel Castro. Bolton absurdly compared the participants in this filthy operation, one of the all-time greatest fiascos in the history of US foreign policy, to “the brave men of Bunker Hill … and Normandy.”

The Monroe Doctrine was written in 1823 by John Quincy Adams, one of the most prominent opponents of slavery and of the war against Mexico in 1846, which he denounced as a war to expand the slave system. When it was first announced by President James Monroe in 1823, it was directed against any attempt by the reactionary monarchical powers of Europe to recolonize the newly independent republics of Latin America.

The definition of the doctrine underwent profound changes, however, with the rise of US imperialism at the turn of the century. This was consolidated by means of stripping Spain of its remaining colonies in the Americas, while ruthlessly repressing the revolutionary strivings of the peoples of those colonies, particularly in Cuba, and imposing semi-colonial US domination that deprived them of any genuine independence.

The so-called “Big Stick” corollary introduced under President Teddy Roosevelt in 1904 set the essential parameters of the doctrine for the next century, setting the stage for some 50 direct US military interventions. It arrogated to US imperialism “international police power” throughout the hemisphere, i.e., the use of force to overturn governments that conflicted with the interests of US banks and corporations, replacing them with the likes of the Somoza dictatorship in Nicaragua and that of Trujillo in the Dominican Republic.

In the latter half of the 20th century, the Monroe Doctrine became inextricably linked to a hemispheric “national security” regime and anti-communism directed at maintaining Latin America as a US sphere of influence and crushing the revolutionary movement of the Latin American working class. The result was the imposition of fascist-military dictatorships throughout much of South and Central America, which murdered, tortured and imprisoned hundreds of thousands of workers, students and other opponents of US domination and military rule.

Given this bloody and criminal history, US administrations in the wake of the dissolution of the Soviet Union referred less and less to the Monroe Doctrine as an operative policy in Latin America. John Kerry, the US secretary of state under the Obama administration, went so far as to declare in a speech to the Organization of American States in 2013 that “The era of the Monroe Doctrine is over,” and to claim, improbably, that Washington was forswearing further interventions and now viewed the lands to its south as its equals.

Now, however, the bloodstained doctrine has been resurrected with a vengeance, first in relation to the cynical regime change operation surrounding the self-proclaimed “interim president” Juan Guaidó in Venezuela, and now with the dramatic escalation of Washington’s illegal and unilateral extra-territorial sanctions against Cuba.

In the first instance, the Trump administration continues to impose crippling sanctions that have deepened poverty and hunger in Venezuela, while insisting that “all options are on the table,” threatening direct military intervention under conditions in which the ploy of declaring Guaidó, a right-wing US-financed political non-entity, as the sole “legitimate” government of Venezuela has failed to spark the military coup that Washington had hoped for.

“It’s for [Venezuelan President Nicolas] Maduro to worry about what the United States is capable of,” Bolton declared in an interview on the PBS television Newshour last week, “and it’s also to make it clear, we value the protection of the 40 to 45,000 American citizens in Venezuela. We don’t want to see any harm come to them.”

The protection of American citizens against supposed “harm” was the pretext for the last two major US military invasions in the hemisphere: in Grenada in 1983 and in Panama in 1989.

Bolton repeated his declaration that the Monroe Doctrine was “alive and well,” adding that its purpose was to “throw a shield around the hemisphere” and to create “the first completely free hemisphere in human history.”

Free from what, one might well ask. The short answer is free from any impediment to the US energy conglomerates’ exploitation of Venezuelan oil; free from competition for trade and resources on the part of China, Russia and the European Union and free from any challenge from below to the domination of US imperialism and its allies in the national bourgeoisie of the various Latin American countries.

It most certainly does not spell freedom for the working class in Latin America. The attitude of the Trump administration toward these workers is exposed every single day in the relentless hounding of immigrants on the US southern border, who have been hunted down by fascist-minded immigration agents, thrown into concentration camps and had their children ripped from their arms.

As for Cuba, Bolton and US Secretary of State Mike Pompeo took the unprecedented action last week of activating what amounts to the “nuclear option” in the Helms-Burton Act, legislation which codified the US blockade against the island nation. Title Three in the act, which allows US companies and citizens to sue in US courts to recover property lost in the expropriations that followed the 1959 Cuban Revolution, had been waived by successive administrations, both Democratic and Republican alike, since it was signed into law by Democratic President Bill Clinton in 1996.

The action, now in force, exposes foreign companies operating in Cuba—European, Chinese and Canadian—to potential lawsuits involving billions of dollars, with the threat that their assets in the US could be seized or that they could be barred from US markets.

The resurrection of the Monroe Doctrine is bound up with the preparations for a new world war. US imperialism is determined to assert its hegemony over not only Venezuela, but also Iran, the Middle East and Central Asia in order to establish its unchallenged control over all of the world’s energy reserves, giving it the ability to deny access to its principal global rival, China.

At the same time, the revival of the discredited doctrine, reviled throughout Latin America, is the response of a US imperialism in decline, confronting the fact that in its “own backyard,” it has been replaced by China as the principal source of foreign investment. China has overtaken the European Union as the second largest trading partner of Latin America, and it is Brazil, Peru and Chile’s leading trade partner.

There is, of course, a domestic component to the waving of the sullied flag of the Monroe Doctrine. It is inseparably linked with the Trump administration’s attempt to wage a fascistic campaign against “socialism,” which it attempts to equate with the corrupt bourgeois regime of Maduro in Venezuela, the centerpiece of its 2020 reelection drive. Ominously, in his address to the right-wing Cuban exiles connected to the Bay of Pigs, a milieu that produced terrorists and assassins involved in many of the crimes of US imperialism in the 20th century, Bolton declared: “We will need your help in the days ahead. We must all reject the forces of communism and socialism in this hemisphere—and in this country.”

The struggle against the attempts of the US ruling elite to promote a fascistic movement against the growth of socialist opposition within the working class finds its most immediate ally in the battle of Latin American workers against their right-wing governments like that of the fascistic former army captain Jair Bolsonaro in Brazil, the right-wing multimillionaire Mauricio Macri in Argentina and Lenin Moreno, who proved his allegiance to imperialism by throwing open the doors of Ecuador’s embassy in London to a British police snatch squad acting on behalf of Washington’s demands for the rendition of WikiLeaks founder Julian Assange.

As the recent strike wave of Mexican workers in Matamoros demonstrated so powerfully, the working class, objectively joined in a common process of production across national boundaries by the exploitative operations of transnational banks and corporations, can find a way forward only through the conscious unification of the US and Latin American working class in struggle to defeat their common enemies, US imperialism and the region’s national ruling oligarchies. This requires the building of a new revolutionary leadership in the working class, sections of the International Committee of the Fourth International, in every country of the hemisphere.