Caitlin Johnstone discusses what it will take for society to turn away from the path of extinction and begin working in collaboration with our ecosystem. 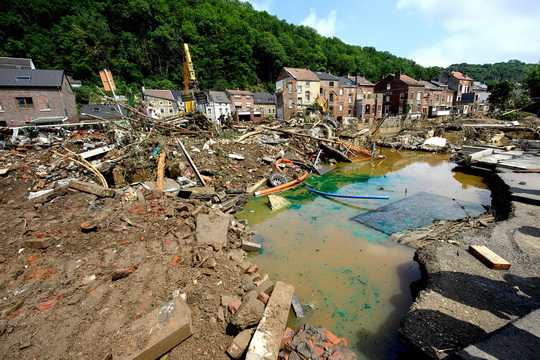 I talk a lot about how we’re destroying our environment with a global system where human behavior is driven by the pursuit of profit, how the power structure which dominates that system does so by violence, exploitation, oppression, and the threat of nuclear war, and how we’re all going to die if we don’t change this system.

Whenever I say this, I get a bunch of capitalism cultists bleating, “You just don’t understand economics bruh,” which is the line they’ve been trained to say to anyone they see criticizing capitalism. It’s silly for a number of reasons, among them the fact that nobody who regurgitates that line understands economics themselves, and the fact that one’s understanding of economics has nothing to do with the death of the ecosystem our species relies on for survival.

The claim that anyone who opposes capitalism “just doesn’t understand economics” is premised on the notion that unfettered capitalism is the best way for a civilization to attain economic growth, which is arguably true; governments like China saw their economies explode when they started implementing elements of capitalism for pragmatic reasons.

If you want to create a bunch of stuff and generate a tremendous amount of wealth, a good way to do that is by giving the capitalist class the protection of the state so they can rake in billions of dollars exploiting the global proletariat without being guillotined.

Problem is, that only looks like a valid point if economic growth is the only value by which you judge a system’s success. If you value quality of life, overall happiness, health, average lifespan, education, eliminating poverty, homelessness and hunger, and many other possible metrics, nations like the United States are far from ideal.

If you value avoiding climate collapse, then the only way to think capitalism is the answer is to espouse on blind faith the belief that the world will be saved by greedy union-busting tech oligarchs who just want to make more stuff and send us all to space. 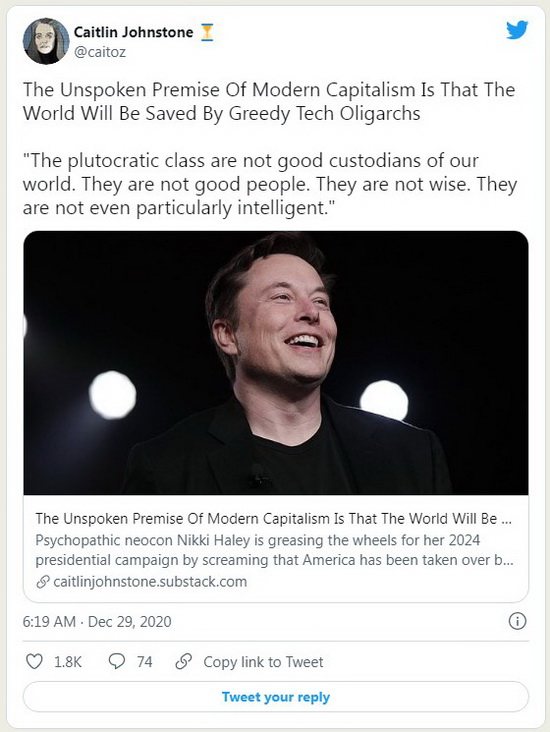 That’s not to say that socialism in and of itself has all the answers on this front either. Nations which have attempted socialism have not historically had the best environmental records, and even a hypothetical ideal socialist society where workers own all the means of production would not be inherently dissuaded from destroying the environment for profit.

What we need, if we are to turn away from the path of extinction and begin working in collaboration with our ecosystem, is a society which values the un-making of things.

Since the dawn of civilization humanity has valued achievement, conquest, invention, creation; it has valued doing things, and it has not valued the undoing of things.

Creating a new kind of machine will bring you fame and fortune and put your name in the history books, while figuring out how to clean up all the pollution caused by the manufacturing and operation of that machine will not. Discovering a new way to kill thousands of people at a time will make you rich, while choosing to sit on that invention instead of unleashing that horror upon the world will not. Cutting down a tree to make toothpicks will make you money, while leaving it to grow for future generations will not.

Interestingly this disparity parallels with the inequality in traditional gender roles throughout the ages. While hunter-gatherer societies were largely egalitarian, after the invention of agriculture some twelve thousand years ago women came to be generally regarded as second-class citizens because they were unable to do fieldwork or conquer other tribes for their land.

Since that time women have had very little say in the construction of our society and its values systems, and for that reason the work they traditionally do — cleaning, caring, conserving, resolving conflicts and building community — has gone unrewarded by money or esteem compared to traditional men’s work. Doing and making are valued, undoing and unmaking are not. The rise of modern capitalism poured rocket fuel on this dynamic.

Most mothers will tell you it’s a pretty thankless job compared to how much labor you pour into it from the moment you wake up in the morning to the moment you lay your head down at night. Because so much of her work goes into disappearing things — dirty diapers, laundry, messy floors, dishes in the sink, owwies, tears, tantrums — people who are conditioned by a society that has for millennia only valued making and doing tend to only notice when her work doesn’t get done. Their attention scans right over all the undoing she spent all day working on; it’s not paid, it’s not rewarded, and for the most part it’s not even appreciated.

In the same way, and for the same reason, people’s attention tends to scan right over the obvious solutions to the ecocidal trajectory our species has been on. Because thousands of years of conditioning have trained us to value doing things and making things and turning over a profit, our attention skips right over the simple solution right under our noses to do less and unmake things and stop pursuing profit at the expense of future generations.

When It Looks Impossible

This is why people who are awake to what’s going on in our world so often feel hopeless and despondent, and why the quote “it’s easier to imagine the end of the world than to imagine the end of capitalism” resonates with so many. Because we live in a society that has no framework or conceptual infrastructure for valuing the disappearing of things, and because making things and turning a profit has no answer for our situation, solutions look impossible.

Cleaning up this mess will take a lot of work and cost a lot, and the reward for that investment won’t be anyone getting rich or any power structure securing a geo-strategic advantage, it will be a future for our children and grandchildren.

The oceans for example are one of our planet’s biggest carbon sinks, and their ability to function as such is being choked off by plastics in the water. Getting that plastic out of there in an environment-friendly way won’t turn a profit like clearing a forest or drilling an oil field will, so if we leave it to the Captains of Industry nothing will be done about it. Capitalism offers no incentive to do it.

Ending growth for its own sake, producing less, consuming less, paying people to stay home instead of commuting to pointless jobs; all of these would help the ecosystem far more than producing some new battery made of strip-mined materials. But there’s no profit, so they’re overlooked as viable solutions.

You’re only ever going to look for solutions to problems through the reality tunnel you’ve been conditioned to look through. For thousands of years human civilization has been valuing the making of more things and devaluing the unmaking of things, when the latter is what we need right now.

Disorders Are the Hidden Cost

A hidden cost is mental illness. In order to manipulate people to buy things that they don’t need with money they don’t have to keep capitalism from collapsing, you need to keep up a non-stop barrage of trauma-inducing consumerist propaganda.

We are all suffering from various mental disorders, from the subtle to the extreme, as a result of this relentless onslaught of brainwashing. Some of these disorders are so prevalent that people assume they are normal. Everything from eating disorders and obesity, to hoarding and shopping addictions, can be traced back to advertising constantly and repetitively ringing our pavlovian bells, while also constantly reminding us that we are not perfect or whole or worthy of love (but maybe if you buy this you will be).

Many readers will attest that you don’t have to be that far along in your waking up journey to start becoming really sensitive to the psychological violence of TV advertising. A TV ad break suddenly becomes physically repellant. In the future we will look back on how coercive and non-consensual mass-scale advertising is and shake our heads in wonder that it was ever allowed to be a thing. Of course, by then, advertising will barely work because too many people will be too awake to manipulate in mass numbers. 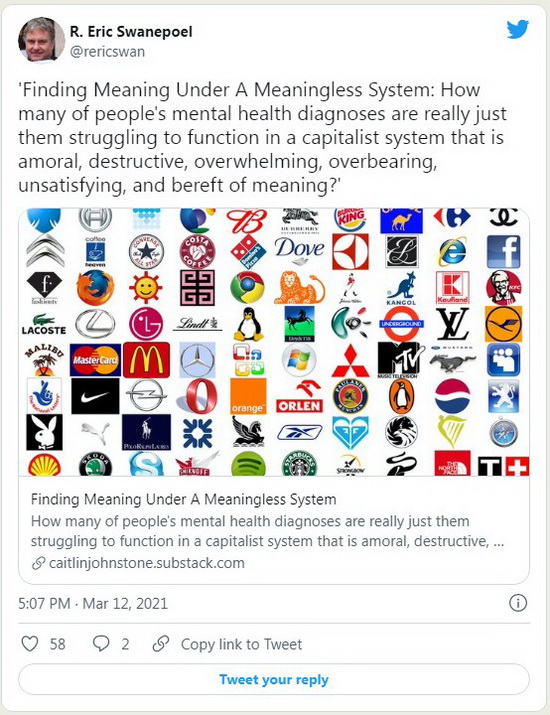 But for now, we are manipulated by the millions into consuming massive amounts of products that aren’t good for us, don’t serve us, or are just another thing that we won’t hardly use but we need to find some cupboard space for. Ending advertising would allow so much health to rebuild in our minds and reduce consumption of materials dramatically; but ending advertising would mean ending capitalism. They are inseparable.

We have the tools now to find everything we need via word-of-mouth, but capitalism requires infinite growth. Even your mom-and-pop shop owner feels the pressure to grow in order to keep up cash flow and cover increasing overheads.

Growth is baked in to capitalism, and right now we need more than anything just to chill. Do less, be less, compete less, expect less of ourselves and each other, produce less, consume less, commute less; but take more naps, be more kind, be more gentle with ourselves and each other, laugh more, cry more, feel more, and regenerate all the energy stolen from us from a rat race that we were never gonna win anyway.

Only when we have systems in place that make this possible will we find the energy to start cleaning up our world and begin living in harmony and integrity with the very ecosystem of which we are intrinsically a part.

Caitlin Johnstone is a rogue journalist, poet, and utopia prepper who publishes regularly at Medium. Her work is entirely reader-supported, so if you enjoyed this piece please consider sharing it around, liking her on Facebook, following her antics on Twitter, checking out her podcast on either Youtube, soundcloud, Apple podcasts or Spotify, following her on Steemit, throwing some money into her tip jar on Patreon or Paypal, purchasing some of her sweet merchandise, buying her books Notes From The Edge Of The Narrative Matrix, Rogue Nation: Psychonautical Adventures With Caitlin Johnstone and Woke: A Field Guide for Utopia Preppers.