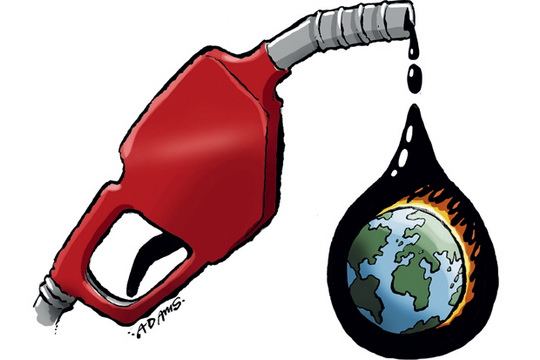 Is international conflict really just a fight over oil? It sometimes seems that way. In Syria and Iraq, the militants of the so-called ‘Islamic State’ sell captured oil while battling to establish a puritanical Sunni theo-cracy. From Central Asia to Ukraine, Russia is contesting attempts (backed by the US) to minimise Europe’s dependence on Russian oil and natural gas. Meanwhile, Obama’s ‘pivot to Asia’ allows the US to threaten the choke points through which most of China’s oil imports must pass.

Conspiracy-mongering petrodeterminists who try to reduce world politics to nothing but a clash for oil are too crude (pun intended). No shadowy cabal of oil company executives pulls the strings of world politics. Most of the world’s oil and gas is the property of government-owned companies, and even private oil companies like ExxonMobil and BP generally defer to their home-country governments. But a grasp of global petropolitics is nonetheless vital to any understanding of the crises in international relations we see today. We also need to know a little recent history.

The end of the Cold War left America’s leadership wondering how to justify the US military protectorates over western Europe and Japan. The 1990 invasion of Kuwait by Saddam provided the answer: instead of temporarily protecting its European and East Asian allies from the Red Army, the US would henceforth perpetually protect them from other threats, including the disruption of the oil supplies on which their economies depended.

By policing critical regions like the Persian Gulf on behalf of all industrial nations, Washington hoped to forestall re-armament and unilateral scrambles for security, including energy security, by the other great powers. George W. Bush expressed this idea in a 2002 address at West Point: ‘America has, and intends to keep, military strengths beyond challenge, thereby making the destabilising arms races of other eras pointless and limiting rivalries to trade and other pursuits of peace.’

The US-Japanese relationship was the best fit for this model of patron-client politics. Japan is dependent for most of its crude oil imports on Saudi Arabia, the UAE, Qatar, and Kuwait, with small amounts from Iran, Russia and the rest of the world. It follows that Japan is also dependent on the US navy to patrol the sea lanes from the Persian Gulf through the Indian Ocean and the waters of East Asia. When Japan contributed cash rather than soldiers to defray the costs of the Gulf War, many Americans protested, failing to understand that this was exactly what American strategy called for.

Americans who hope that ‘energy independence’ can reduce US involvement in the Middle East similarly fail to understand the post-Cold War strategy of their own country. Thanks to the revolution in oil and gas production made possible by hydraulic fracturing technology (fracking) and horizontal drilling, the US has passed Russia as the world’s leading energy producer and Saudi Arabia as the leading producer of crude oil. A relatively small portion of America’s oil imports last year came from the Persian Gulf, chiefly Saudi Arabia (17 per cent), Iraq (4.4 per cent) and Kuwait (4.2 per cent). The biggest share came from Canada (33 per cent). The US military is not in the Persian Gulf to protect oil destined for the US so much as to secure the oil supplies of Europe, Japan and South Korea, and to implicitly blackmail China.

One element of this post-Cold War American grand strategy has been the attempt to minimise the dependence of the European Union on Russia, which supplies about a third of Europe’s natural gas. Ever since the 1990s, the US has favoured the construction of pipelines that would transfer oil or gas from the former Soviet republics of the Caucasus and Central Asia to Europe while bypassing Russian territory. One, the Baku-Tbilisi-Ceyhan pipeline, has been operational since 2006. Another, the Nabucco pipeline, was intended to bring gas from Azerbaijan to Europe through Georgia, Turkey and Bulgaria, but it has been abandoned in favour of two pipelines with much lower capacity. Russia is proceeding with its own alternative, the South Stream gas pipeline, which would bypass Ukraine and bring gas from Russia under the Black Sea to Bulgaria, Serbia, Hungary, Slovenia and thence to Italy. It remains to be seen whether this and other projects fall victim to European sanctions against Russia arising from the Ukraine crisis.

China, too, has been involved in the pipeline wars with the US — as a consumer of oil and gas, rather than as a producer like Russia. About 80 per cent of China’s oil imports pass through the Strait of Malacca, between Malaysia and Indonesia, giving the US navy a potential chokehold. This explains Chinese support for a proposed Iran-Pakistan pipeline, which could be extended to China. Opposed by the US, the pipeline has been thwarted by Saudi financial pressure on the Pakistani government. But China has other options for avoiding an American naval stranglehold, including a pipeline across Burma and the Chinese-subsidised port of Gwadar in Pakistan.

China’s claims to the South Sea islands, which have embroiled it in recent conflicts with Vietnam, the Philippines and Japan, are doubtless motivated in part by the desire to develop offshore oil reserves. After China deployed an oil rig in contested waters in May, nearly two dozen died in anti–Chinese riots in Vietnam.

Most consequential of all is the deal between Beijing and Moscow to transport gas to China by pipeline from fields in Siberia. The trade deal was not only the biggest in history but also a dramatic rebuke to the US attempt to encircle and weaken both powers.

China and Russia, along with India and Brazil, are challenging another basis of post-Cold War US hegemony, the ‘petrodollar’. The practice of paying for oil in dollars, even if no Americans are involved, has bolstered the dollar as the world’s reserve currency and helped the US to run large deficits since the Reagan years without too much pain. Many of post-Saddam Iraq’s oil concessions have gone to non-American firms, but the US achieved a small victory by ensuring that the transactions would use dollars.

Far from being reassured that their ‘legitimate interests’ are being protected, China and Russia have doubled down on their efforts to build up their own oil networks at America’s expense. And despite two decades of US support for non-Russian pipeline routes, Europe remains highly dependent on Russian gas. The former German chancellor Gerhard Schröder even sits on the board of a consortium building a Russo-German gas pipeline. At the same time, the American public, having turned against the wars in Iraq and Afghanistan, simply want less foreign policy, and attempts to cut the budget deficit have set US military spending on a downward path.

Two decades after the Gulf War, America’s commitment to secure the oil supplies of the Persian Gulf and the sea lanes needed for their transit on behalf of the other industrial powers has proven to be far more expensive than Washington expected. The stationing of US troops in Saudi Arabia and other Gulf allies enraged anti-American jihadists, Osama bin Laden among them.

The Bush administration cynically used popular panic following the 9/11 attacks and false claims about Iraqi ‘weapons of mass destruction’ to justify the US invasion of Iraq in 2003. In addition to turning oil-rich Iraq into a permanent American military base like South Korea, the invasion was intended to save money, by replacing the post-Gulf War policy of ‘dual containment’ of Iraq and Iran with containment of Iran alone. In March 2003, the undersecretary of defense for policy Paul Wolfowitz told Congress that ‘we’re really dealing with a country that could finance its own reconstruction’, and a month later the Pentagon estimated that the Iraq war would cost $4 billion. Rather than paying for itself, to date the war has cost the US $800 billion, a figure that does not include legacy costs such as a lifetime of medical treatment for wounded veterans, or the losses in life and property to Iraqi nationals.

Had George W. Bush been an Iranian mole, the clerical regime in Tehran could hardly have benefited more from the suborning of the military power of the US and its allies to remove two of Iran’s major enemies: Saddam and the Taleban government in Afghanistan. Instead of serving as an American ally against Iran, post-Saddam Iraq has been ruled by pro-Iranian Shias. The Shi’ite sectarianism of Nouri al-Maliki’s government has in turn contributed to the success of Isis.

The fracking revolution means that America will have so much oil and gas that it needn’t import any by 2035, according to the International Energy Authority. That timetable, of course, assumes America’s energetic environmentalists don’t manage to slow progress, and it still leaves the next 21 years to get through. So if Europe wants to break its addiction to Russian energy, it will need to start doing its own fracking – rather than wait for American imports. Putin’s continued confidence over the Ukraine this week can be explained by a simple fact: winter is coming, and the countries complaining about him need his gas rather badly.

It is almost exactly 41 years since the Saudis and Egyptians discussed using oil as a weapon – then, to penalise America for helping Israel in the Yom Kippur war. Yet pipeline diplomacy is as relevant now as ever. Look hard enough and you can see such games still being played today in pursuit of grand political goals — whether to establish a Sunni caliphate or to preserve American hegemony over developing European countries. Once America believed it would always have to police this global struggle for resources; soon, the American electorate may decide that it’s not worth the cost.

There will be much discussion of the world’s future at next week’s Nato summit in Wales. America’s European allies have reduced their military capabilities over the years, persuaded that Uncle Sam would always protect their energy supply if things grew difficult. Such old certainties are fast disappearing. Europe may still have to learn the hard way that petropolitics still matters.