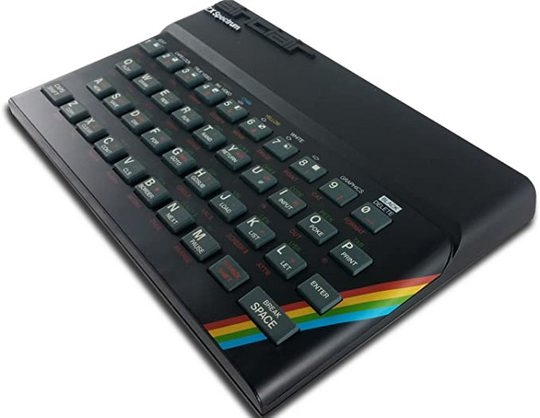 Who remembers the winter of 1985? In the UK, it was one of the coldest for many years, although east-west tension was beginning to thaw as US president Ronald Reagan met with Mikhail Gorbachev in November. I was 12 years old and unworried by historic political meetings or war in the middle east. All I wanted to do was play computer games. And I wanted to play them on a Sinclair ZX Spectrum.

I'd first been introduced to the Speccy three years earlier. Growing up, everyone seemed to have that one friend whose parents bought them everything. Mine lived across the road, and one Saturday morning, I strolled into their lounge where he had a 16K Spectrum set up, the tiny computer dwarfed by the large television and furniture. We soon had a game loaded, and, of course, I recall which one: Escape by New Generation Software. A simple maze chase-‘em-up, Escape had us enraptured as we plodded around the faux 3D screen, dodging dinosaurs while trying to locate an invisible axe.

Another friend received a 48K Spectrum for his birthday the following year. He brought it around one afternoon, plugging it into our black and white kitchen TV. Then the day disappeared, swallowed up by the delight that was Melbourne House's Scramble clone, Penetrator. We created our own maps using its in-built level designer when we’d finished playing. In an era where computers were financially out of reach to many people, this genuinely felt like the most exciting time of my life.

However, I wasn't a stranger to playing videogames at home. One of these friends also owned a Philips Videopac, and I had an ageing Mattel Intellivision somewhere in my bedroom. But the games for both of these consoles were elusive and expensive. I'd already seen Mastertronic games for sale in my local newsagent for just £1.99 each. I'd seen the racks of cassette boxes in WH Smith and Boots (yes, Boots!). Specialist magazines Crash, Your Sinclair and Sinclair User were on sale every month. This was an actual computer, a machine that could be programmed and even used for educational purposes. Yeah, right. 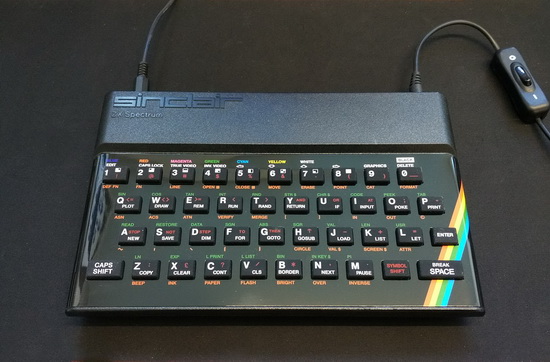 It took a while to convince my parents, and by the time I’d got my first Spectrum Sinclair were experiencing turbulent times; the Spectrum might have been an outstanding success and had already earned Sir Clive Sinclair a knighthood in 1983, but his plans to introduce a superior 128K model had been scuppered. Retailers such as Dixons, who put together attractive bundles for the Christmas market, were unhappy that they'd been saddled with the minor upgrade, the Spectrum 48K+, as Sinclair plotted its 128K machine. While the 128 may have been a disappointment in retrospect, it's hard to imagine many 48Ks would have sold that Christmas had it been available. The result was a Spanish release 128K, while my parents, like many others, were sold 48K+ Spectrums in their thousands. 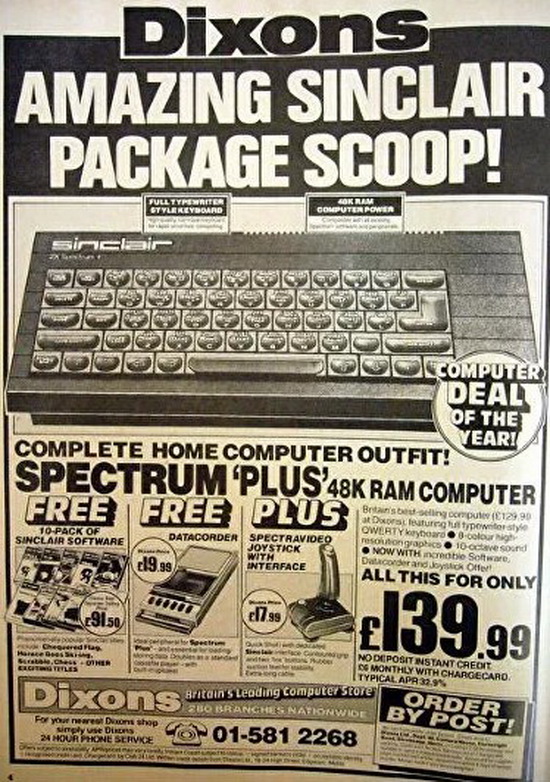 None of this mattered to me on that Christmas morning as I stared wide-eyed at the massive box before me. This was a bundle of technological wonder. Inside was a cassette player, joystick, joystick interface and a large pile of games, mainly from the recently-defunct Imagine Software. And finally, the Spectrum+ itself, bereft of the quirky rubber keyboard but including a reset button so you didn't have to unplug it whenever you wanted to play another game. It was a joyous gift.

Of course, it didn't work.

Due to a common CPU error, the TV screen displayed a mass of coloured blocks, the Speccy stubbornly refusing to function in any other way, no matter how much you stabbed that tiny reset button. With the shops shut for at least another day, I spent Christmas 1985 reading the inlays of those amazing-looking games repeatedly. By the time I got my replacement Spectrum, I knew the rudimentary plots to Alchemist, Zzoom, Arcadia, Pedro and Jumping Jack off by heart. I'd be poring over them again soon. The replacement didn't work either, though. I had to endure another agonising wait. 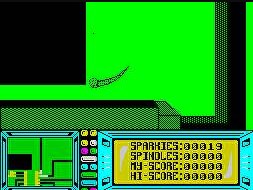 They simply do not make games like Fat Worm Blows A Sparky any more.

Then the third one functioned! Hooray! Finally, I got to play Alchemist, a brilliant arcade adventure; shoot-'em-up Zzoom that positively encouraged you to gun down the innocents you were supposed to be protecting; and early real-time simulation game Stonkers. It was the start of a love affair that persists today, and like most relationships, the Spectrum and I have had our ups and downs.

1986 was our honeymoon period. With the delayed 128K ignored by most games companies, a vast range of games were released for the extended user base of the 48K model. It wasn't just the games: all my friends had Spectrums, and we traded software, magazines and, er, blank cassettes. The Spectrum wasn't just a computer: it was a family, whether it be mates chatting in the playground about the latest games or the friendly, light-hearted pages of Crash and Your Sinclair.

In 1986, arcade licences became popular thanks primarily to Elite Systems and its excellent conversions of Bomb Jack, Ghosts' n' Goblins and Space Harrier. Ocean Software worked hard to rid itself of its mercurial reputation, and programmers such as Steve Turner, Raffaele Cecco and Jonathan Smith constantly challenged the accepted wisdom of what could be created on the Spectrum.

It's no understatement to state that Christmas 1986 was one of the happiest times of my life. I had a bumper 198-page issue of Crash to absorb and a stack of single and double-jewel cassette case sized presents under the tree. Thanks to previous issues of Crash, I had excitedly written down all the games I'd wanted and given the list to my mum to distribute among the family. The list included Ocean's The Great Escape and Cobra; the Speccy port of the C64 classic, Uridium from Hewson, who also released the medieval romp Firelord; the impossibly colourful Lightforce from Faster Than Light (aka Gargoyle); Durell's ludicrously-titled Fat Worm Blows A Sparky; and a host of budget games from darts sim 180 to Firebird's Thrust, a fantastic space shooter inspired by Atari's arcade classic, Gravitar. The shelf above my desk became laden with the colourful boxes of these games and more. 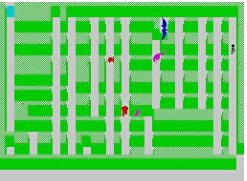 The first game I played on a Spectrum, New Generation’s Escape.

1987 brought more games and envious glances at the incoming 16-bit computers. I had a pen pal, a buddy from the classified ad pages of Crash with whom I used to regularly swap games. He got an Atari ST, which initially brought me a bountiful – and highly generous – parcel full of Spectrum games. Amstrad now owned the Spectrum brand, and the new Spectrum +2, with the practical but ugly addition of an in-built cassette player, was my next computer in 1988. The three leading Spectrum magazines were fiercely competing with cover-mounted cassettes, each one housing demos, reader programs and full previously-released games. The result was a gradual decline in Spectrum game sales, mixed in with a changing demographic and the continuing problem of pirated games. And as everybody knows, games are what makes a system. My Speccy and I stuck together until the early 90s when it was despatched off to a charity shop by my mum. I had been tempted away from the old girl by a bright, shiny and wonderful Sega Mega Drive.

And so the Spectrum and I endured our fallow period, a love dulled by familiarity and the charm of dedicated consoles. By the late 90s — a defining era of the likes of Tomb Raider, Resident Evil and Mario 64 — the Spectrum was all but forgotten, at least by me. A community still existed, specifically the website World Of Spectrum, but I was too busy blasting zombies to notice.

But like a chance encounter with an old friend you've not seen for years, one day, the Spectrum reappeared in my life. Issue one of Retro Gamer magazine, published by Live Publishing and edited by another Spectrum fan, Martyn Carroll, tapped into the general growing nostalgic yearning for old games and computers. The Speccy was there on the cover, as was the Mastertronic logo. Back in the 80s, we all had Mastertronic games. Many of them were terrible, but they were often just £1.99 a pop, and you could buy them from the petrol station down the road.

Retro Gamer itself may have gone through two publishers since those days, yet the Spectrum revival has continued apace. Homebrew coders constantly stretch the bounds of what can be achieved within 48 and 128K. The Spectrum Next is the latest version of the computer, and hopefully, the second issue will reach more fans soon. And my beloved Crash Magazine, that glowing tome stuffed to the brim with Speccy goodness, is back in WH Smith, courtesy of Fusion Retro Books.

There's no doubt that most Spectrum fans will never improve on those lovingly-recalled days of 1986. But what we've got today is as good a recreation of those days that we could reasonably hope for, a mere 40 years later. Happy birthday, dear Spectrum. I won't forget you again. 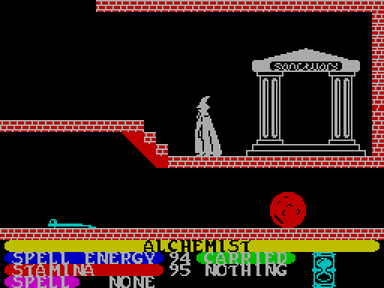 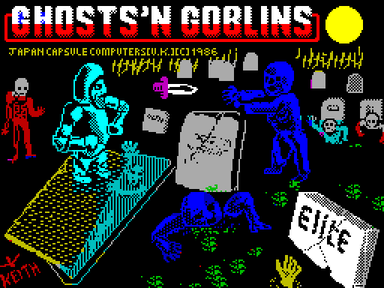