White supremacy is an incredibly insincere distraction that tries to erase the histories of White, Black, and Red peoples.

Some say the white supremacy ideology comes from pride. Some say it comes from a belief that one's culture is superior. Some say it comes from hatred. I never believed these things are the primary reason because I always sensed a deep loss in the heart of countless white people, some deep emptiness and fear. Though, admitting to this emptiness is another matter. James Baldwin wrote about American racism beyond the lines designed to separate us, saying of white supremacy : “The root of the white man's hatred is terror. A bottomless and nameless terror...”

After talking with many White American friends about the real origins of white supremacy, I found there was always a certain limit beyond which they refused to go. This had nothing to do with any hatred toward “the other” and everything to do with a chasm of pain they could not bear to speak of — not even for a few minutes could they speak of what has been seeping out of the wound for so long. It is hard to speak of buried trauma.

One wonders what might get stirred up in that uncovering. Beyond wondering, there is healing, and the certainty that the truth will set you free.

We can be free in this life, you in your body, me in mine, together. To heal the history we carry, let's allow the past and future to benefit from the courage of the present.

There were Massacres, But No One Ever Says Their Names 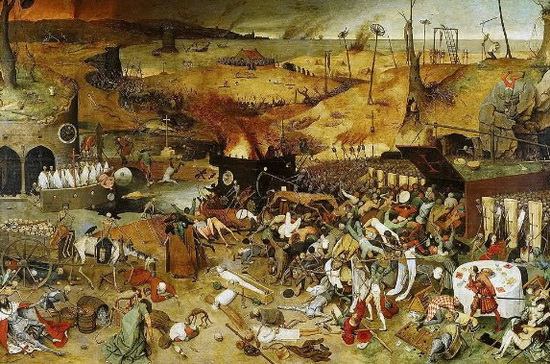 The massacres in Europe lasted at least 500 years. Public tortures. Inquisitions. Generation after generation of entire communities forced to watch their family, friends, and neighbors terrorized and killed in front of them.

The ideology of white supremacy as we know it came at the end of this specific period of history during which immense traumas occurred simultaneously: the mass killing and public torture of women, the brutal assault against common people, the 'thought-police' Inquisition committees, the terror from which one could almost not escape, and the enslavement of White people throughout the region. This all happened in the centuries before the transatlantic slave trade.

When you get to that part of the origin of white supremacy, and the deal that was subsequently made with one's oppressor — that deal being the ridiculous 'white supremacy' idea and the target of the terror shifting to others — the conversation often drops dead. Silence, a few words here and there. Change the topic. Avoid that pain. This is the point beyond which few have been willing to go.

The Details of the Time 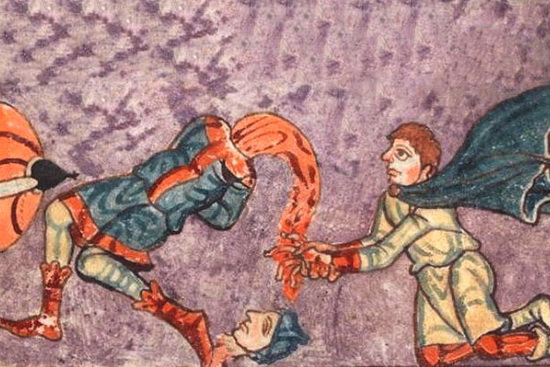 Many have wondered how White people came up with the brutal tortures they imposed on Native and African people in 'the Americas.' A look into history shows that many of the same tactics were used on White people during the genocide against them.

The Inquistioners also targeted hair in Europe , especially towards women, which was used against Native and African people in the Americas. The crimes they committed in this regard are barely utterable .

The amount of whipping in Europe begs to be mentioned because of its relevance to American history.

White people were intimately familiar with being enchained themselves , necks in iron, shackled in rows together, taken on ships here and there, sold in markets — for centuries. They were also enslaved throughout the region during the same period as African people, likely side by side, during the Arabic and Viking slave trades that preceded the transatlantic one.

In Europe those days, the people who escaped slavery were certainly not free. They were lynched , burned in public executions, tortured at length in public, and hunted down – by the millions.

Many White people seem to have no memory of this history.

“Whites were enslaved during the Arabic and Viking slave trades that preceded the transatlantic one.”

The kind of torture documented in a book in 1860 by Pressel of a woman in Prossneck, Germany is a small glimpse into the genocide. Anyone is advised to skip the following quoted list describing the torture. It is reprinted simply to acknowledge what was going on and to whom, by whom, and the lies upholding it, etc.

“Verbatim report of the first days of torture of a woman accused of witchcraft at Prossneck, Germany, in 1629.

1. The hangman bound the hands, cut her hair, and placed her on the ladder. He threw alcohol over her head and set fire to it so as to burn her hair to the roots.

2. He placed strips of sulphur under her arms and around her back and set fire to them.

3. He tied her hands behind her back and pulled her up to the ceiling.

4. He left her hanging there from three to four hours, while the torturer went to breakfast.

5. On his return, he threw alcohol on her back and set fire to it.

6. He attached very heavy weights on her body and drew her up again to the ceiling. After that he put her back on the ladder and placed a very rough plank full of sharp points against her body.

7. Then he squeezed her thumbs and big toe in the vise, and he trussed her arms with a stick, and in this position kept her hanging about a quarter of an hour, until she would faint away several times.

8. Then he squeezed the calves and the legs in the vise, always alternating the torture with questioning.

9. Then he whipped her with a rawhide whip to cause blood to flow out over her shift.

10. Once again, he placed her thumbs and big toes in the vise, and left her in this agony on the torture stool from 10:00 a.m. till 1:00 p.m., while the hangman and the court officials went out to get a bite to eat. In the afternoon a functionary came who disapproved this pitiless procedure. But then they whipped her again in a frightful manner. This concluded the first day of torture. The next day they start all over again, but without pushing things quite as far as the day before.
— Wilhelm Pressel, Hexen and Hexenmeister (1860) ”

Historian and scholar, Silvia Federici, says of the historical amnesia regarding this period:

towards this genocide, an indifference that has bordered on complicity, since the elimination of the witches from the pages of history has contributed to trivializing their physical elimination at the stake, suggesting that it was a phenomenon of minor significance, if not a matter of folklore.”

She also explores the emergence of Capitalism during the genocide against these women.

Supremacy Was Never The Question. It's Just a Mask 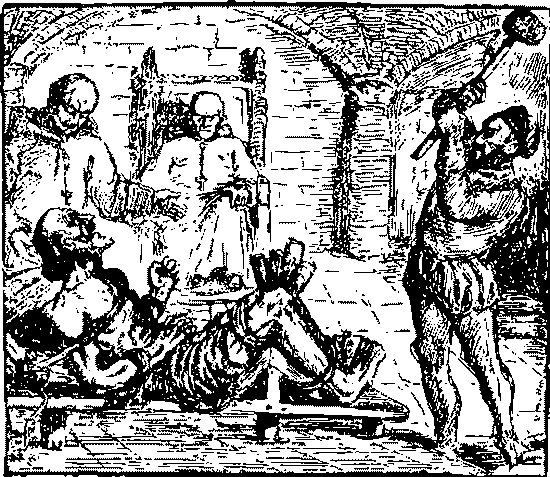 The lie that Black people are somehow inferior was a distraction that masked — and nearly erased — the reality that 'white supremacy' ideology as we know it came at the end of this brutal period in Europe. But it wasn't “about color” in Europe. There they were given a different reason. In Europe they were killed for heresy , “any belief or theory that is strongly at variance with established beliefs or customs.” The Inquisition of that age has been described as a court and the tormenters focused on getting 'confessions.' Their barbarity is astounding.

The lie that Black people are somehow inferior was also another layer of the brutality that grew as it moved on from Europe to Africa and the Americas. Psychological warfare, aimed at distraction and destruction.

If it wasn't “about color” in Europe, then it was never about color at all. 'White supremacy' is an incredibly insincere distraction that tries to erase the histories of White, Black, and Red peoples. As a result, many White people seem to have forgotten what happened to them, while many African and Native people have had to fight within their hearts regarding their own inherent value. Who benefits from this?

Who was it that concocted this very strange 'white supremacist' idea: the White people who had been brutalized for so long, or the powers-that-be (making the terror)? Who was it calling People of Color savages, too natural, strangely spiritual and they should all be studying Christianity? Who wrote that script to be repeated? It's obvious who wrote it. And it's obvious who accepted this new ideology under duress.

Some White people tout white supremacy, and the clear truth is – they are more than encouraged to. But to speak of these massacres and the deal one subsequently made with one's oppressor? Well, there's a deep-seated fear there, few people will speak of it. That's not healing. That's an imposed silence.

Who imposed that silence? When did it start?

If the people living in the ghettos and reservations of America, who have been so long mistreated, were today offered a deal that some “less than” people had just arrived and would be put on the lowest rung, and they were offered a deal – free land and houses, a bunch of free money, honey flattery, a much easier life, a few steps up the rung, a permanent raise, and silence as to any mistreatment of these new “less thans” – who among the people would take that deal? And who would not?

This, to me, is pointing to the heart of the battle. It's not skin tone, it's the battle of the heart.

James Baldwin spoke passionately about race in America, searing images unto a nation trying to plaster itself in tv imagery that avoided the questions almost altogether. Baldwin never tried currying favors from the class oppressing the people. He spoke searing words to the heart of corrupted authority out of the desire for profound change.

In many pockets of America, race conversations have moved into a state of mutual enrichment, merging worlds even if only for a moment. The possibilities are endless for what could happen in the healing of race in America.

James Baldwin spoke passionately about race in America, searing images unto a nation trying to plaster itself in tv imagery that avoided the questions almost altogether. Baldwin never tried currying favors from the class oppressing the people. He spoke searing words to the heart of corrupted authority out of the desire for profound change.

In many pockets of America, race conversations have moved into a state of mutual enrichment, merging worlds even if only for a moment. The possibilities are endless for what could happen in the healing of race in America. 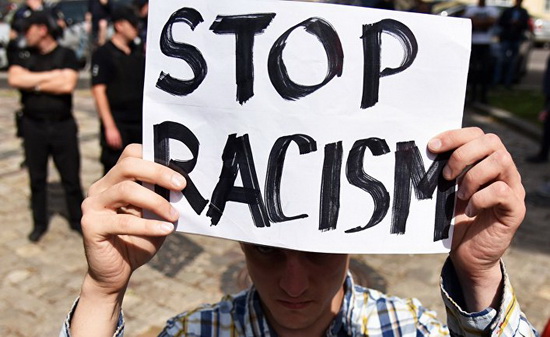 This is not written as any kind of acceptance of the idea of white supremacy, which is blatantly ridiculous and untrue. It is not written as any excuse about the violence and degradation that flows from this philosophy. It is written to look more closely at the ideology's true origins and authors.

We now understand how trauma affects communities, and how it can manifest in future generations if it isn't addressed. How do we work together to heal the pain we've all been forced to endure by these powers-that-be-making (the terror)? How do we heal when some of us turned into perpetrators in our own communities and beyond? How do we change our circumstances when a brutal system tries to erase all our histories and replaces them with lies?

The cycles of pain unleashed on each other within our communities and between them “is enough to make prophets and angels weep,” as Baldwin said . Where does the pain end and the beauty begin?

Who will write the future story of race on this planet? Who will educate us about who we are and our potential? The-powers-that-be (making the terror)? Or will we ourselves write a different story?