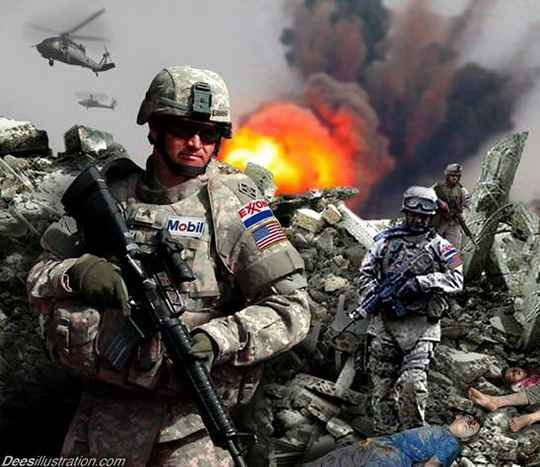 A major test for President Obama is whether he will – in the face of the Republican midterm victories – submit to neocon demands for more wars in the Middle East and a costly Cold War with Russia or finally earn the Nobel Peace Prize that he got at the start of his presidency.

Buoyed by the Republican electoral victories, America’s neocons hope to collect their share of the winnings by pushing President Barack Obama into escalating conflicts around the world, from a new Cold War with Russia to hot wars in Iraq, Syria, Afghanistan and maybe Iran. 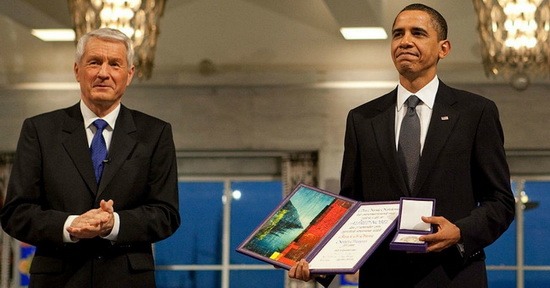 The new menu of neocon delights was listed by influential neocon theorist Max Boot in a blog post for Commentary magazine, an important outlet for neocon thinking. Boot argued that the Republicans – and thus the neocons – have earned a mandate on national security policy from the electoral repudiation of Obama’s Democratic Party.

“I am convinced [national security policy] was as important a factor in this election as it was in the 2006 midterm when, in the midst of Iraq War debacles, the Republicans lost control of the Senate,” wrote Boot, who then blamed Obama for pretty much everything that has gone wrong:

“The president did himself incalculable damage when he set a ‘red line’ for Syria last year but failed to enforce it. That created an image of weakness and indecision which has only gotten worse with the rise of ISIS and Putin’s expansionism in Ukraine.”

Boot’s recounting of that history is, of course, wrongheaded in several ways. It may have been foolish for Obama to set a “red line” against chemical weapons use in Syria, but there is growing evidence that the Syrian government was not behind the lethal sarin attack of Aug. 21, 2013, and that it was instead a provocation by rebel extremists. [See Consortiumnews.com’s “The Collapsing Syria-Sarin Case.”]

Further, Putin’s approach to the Ukraine crisis in February 2014 was reactive, not provocative or expansionistic. It was the European Union and the United States (led by neocons such as Assistant Secretary of State for European Affairs Victoria Nuland, National Endowment for Democracy President Carl Gershman and Sen. John McCain) that set out to overturn the Ukrainian status quo.

Neocon support for political disturbances in Kiev, including Nuland plotting how to “glue this thing,” contributed to the putsch that ousted elected President Viktor Yanukovych and touched off a bloody civil war. Putin was supporting the status quo, i.e., maintaining the elected government, not instigating its overthrow. [See Consortiumnews.com’s “The Powerful Group Think on Ukraine” and “Treating Putin Like a Lunatic.”]

And, the Islamic State of Iraq and Syria arose not from Obama’s timidity but from the neocon-inspired invasion of Iraq last decade. ISIS emerged from the hyper-violent Al-Qaeda in Iraq, which didn’t exist until President George W. Bush followed neocon advice to invade and occupy Iraq. The terrorist group, rebranding itself as the Islamic State, moved on to Syria where the neocons were seeking another “regime change” in the overthrow of President Bashar al-Assad. [See Consortiumnews.com’s “Neocons Revive Syrian ‘Regime Change’ Plan.”]

If Obama had bombed the Syrian military in summer 2013, as Boot and other neocons wanted, not only might Obama have been attacking the wrong people for the sarin attack, he might well have precipitated the collapse of the Syrian government and a victory for either ISIS or al-Qaeda’s Nusra Front, the only two effective fighting forces among the anti-government rebels. There would have been a good chance that jihadist banners would be flying over Damascus, creating a terrorist state in the heart of the Middle East.

In other words, Boot is working not only from a false narrative but a dangerous fantasy. Nevertheless, it is a narrative that is widely accepted inside Official Washington where one of the favorite sayings is “perception is reality.” So, although Boot’s perception is factually unhinged, it is regarded as “reality” by many “smart people” in the world’s most powerful capital.

After laying out his false diagnosis – that Obama’s supposed failure to destroy the Syrian military in 2013 led to the crises of Ukraine and ISIS in 2014 – Boot then prescribes what needs to be done.

First, he wants the Republican-controlled Congress to pour more money into the U.S. military or, as he puts it, “Save the defense budget from the mindless cuts of sequestration, which are already hurting readiness and, if left unabated, risk another ‘hollow’ military.”

Second, launch a full-scale economic war against Russia while dispatching the U.S. military to defend the Ukrainian regime now in control of Kiev and to other nations on Russia’s borders. Or, as Boot says: “Impose tougher sanctions on Russia, freezing Russian companies entirely out of dollar-denominated transactions, while sending arms and trainers to Kiev and putting at least a Brigade Combat Team into each of the Baltic republics and Poland to signal that no more aggression from Putin will be tolerated.”

Third, keep the U.S. military fighting in Afghanistan indefinitely. Or, as Boot says, “Repeal the 2016 deadline for pulling troops out of Afghanistan and announce that any drawdown will be conditions based.”

Fourth, recommit a larger U.S. military force to aid the Iraqi military and to invade Syria. Or, as Boot says, “Increase the tempo of airstrikes against ISIS, and send a lot more troops to Iraq and Syria to work with indigenous groups – we need at least 15,000 personnel, not the 1,400 sent so far.” [Emphasis added to point out that sending U.S. troops into Syria would amount to an invasion.]

Though the Syrian government has tolerated U.S. airstrikes against ISIS, the idea of sending U.S. soldiers into Syria would be a game-changer and underscores how casually neocons call for committing the U.S. military to war and how disdainful they are of international law. If Boot’s intentions on Syria aren’t already obvious, he further recommends “launching airstrikes on Iran’s proxy, [Syrian President] Bashar al-Assad.”

Despite the breathtaking quality of this recommendation, Boot tries to tamp down any alarm by adding: “This isn’t a call for U.S. ground combat troops, but we do need a lot more trainers, Special Operators, and support personnel, and they need to be free to work with forces in the field rather than being limited to working with brigade and division staffs in large bases far from the front lines.”

Apparently Boot foresees a Libya-style operation in which the U.S. military and its allies destroy a government’s armed forces from the air while rebels on the ground ultimately take power. In 2011, the Libya strategy led to the ouster and murder of Muammar Gaddafi followed by the country collapsing into violence and chaos, including the killing of the U.S. ambassador in Benghazi and the decision by Western governments to abandon their embassies in Tripoli.

In Syria, such a scenario would likely lead to a victory by Islamic extremists, but it would fit with the Israeli strategy of favoring the ouster of Assad, an Iranian ally, even if the conflict ended with al-Qaeda-related radicals in power.

Boot’s recommendations match closely the strategic interests expressed by Israel’s Likud leadership. As the Israeli Ambassador to the United States Michael Oren told the Jerusalem Post in September 2013, “The greatest danger to Israel is by the strategic arc that extends from Tehran, to Damascus to Beirut. And we saw the Assad regime as the keystone in that arc. …

And, if instigating a new Cold War with Russia and expanding wars in Afghanistan, Iraq and Syria aren’t enough for you, Boot also advocates what would amount to a military ultimatum to Iran, saying:. “Make clear that any deal with Iran will require the dismantlement of its nuclear facilities – not just a freeze that will leave it just short of nuclear weapons status.”

And what if Iran refuses to dismantle its nuclear facilities or throws out international inspectors? Then, presumably Obama would have to enforce this new “red line” with yet another war, this one against Iran, just as Israeli Prime Minister Benjamin Netanyahu and neocons have long favored. Remember Sen. McCain breaking into a Beach Boy tune to extol the idea to “bomb, bomb, bomb Iran.”

Boot makes it clear that what is important for Obama is to realign U.S. foreign policy with the desires of Israel and the Sunni states against Shiite-ruled Iran. He says: “End the rapprochement with Iran that has scared our closest allies in the Middle East, and make clear that the U.S. will continue its traditional, post-1979 role of containing Iranian power and siding with the likes of Israel, Jordan, Saudi Arabia, and the UAE over Tehran.”

In case you’re wondering, Boot is not just some lonely neocon voice in the wilderness. He is a senior fellow at the powerful Council on Foreign Relations and a close associate of the Kagan family of neocon royalty, which includes Robert Kagan’s wife, Assistant Secretary of State Victoria Nuland.

So, the neocon thinking is now out in the open. Boot has explained how the neocons view the national security implications of the Republican electoral victory and how Obama should bend to this supposed mandate. But Boot also has left little doubt what will follow if Obama does submit to the neocon agenda – a future of endless warfare across the Middle East and even nuclear brinksmanship with Russia.

There has long been a madness to neocon thinking, matching what the most extreme elements of the Israeli government seem determine to create, a roiling chaos across the Middle East amid fantasies of “regime change” somehow producing Arab leaders compliant with Israeli interests.

Yet, to carry out these schemes, which far exceed the capabilities of even Israel’s highly capable military, the American neocons and Israeli hardliners need the U.S. taxpayers’ money to pay for the wars as well as young American soldiers coming from small towns and large cities across the United States to be dispatched halfway around the world to kill and die.

As President Obama heads into the final quarter of his presidency, he must decide whether he will be led down that bloody path or finally stand up to the neocons (and their allies in Congress and within his own administration) and seek reasonable accommodations for peace with the countries on Max Boot’s hit list.