Wealth inequality is worse than it has been in a century—and it has contributed to a vicious political-economic cycle in which taxes are cut on the top, resulting in even more concentration of wealth. 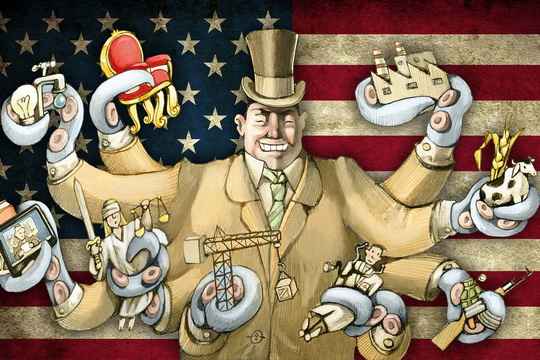 Elon Musk's wealth has surpassed $200 billion. It would take the median U.S. worker over 4 million years to make that much. Wealth inequality is eating this country alive. We're now in America's second Gilded Age, just like the late 19th century when a handful of robber barons monopolized the economy, kept wages down, and bribed lawmakers.

While today's robber barons take joy rides into space, the distance between their gargantuan wealth and the financial struggles of working Americans has never been clearer. During the first 19 months of the pandemic, U.S. billionaires added $2.1 trillion dollars to their collective wealth and that number continues to rise.

And the rich have enough political power to cut their taxes to almost nothing—sometimes literally nothing. In fact, Jeff Bezos paid no federal income taxes in 2007 or in 2011. By 2018, the 400 richest Americans paid a lower overall tax rate than almost anyone else.

But we can not solve this problem unless we know how it was created in the first place.

Let's start with the basics.

Wealth inequality in America is far larger than income inequality.

Income is what you earn each week or month or year. Wealth refers to the sum total of your assets—your car, your stocks and bonds, your home, art—anything else you own that's valuable.Valuable not only because there's a market for it—a price other people are willing to pay to buy it—but because wealth itself grows.

As the population expands and the nation becomes more productive, the overall economy continues to expand. This expansion pushes up the values of stocks, bonds, rental property, homes, and most other assets. Of course recessions and occasional depressions can reduce the value of such assets. But over the long haul, the value of almost all wealth increases.

Next: personal wealth comes from two sources.The first source is the income you earn but don't spend. That's your savings. When you invest those savings in stocks, bonds, or real property or other assets, you create your personal wealth— which, as we've seen, grows over time.

The second source of personal wealth is whatever is handed down to you from your parents, grandparents, and maybe even generations before them—in other words, what you inherit.

Lesson: Personal wealth comes from your savings and/or your inheritance.

II. Why the wealth gap is exploding

The wealth gap between the richest Americans and everyone else is staggering.
In the 1970s, the wealthiest 1 percent owned about 20 percent of the nation's total household wealth. Now, they own over 35 percent.

Much of their gains over the last 40 years have come from a dramatic increase in the value of shares of stock.

Who has benefited from this surge? The richest 1 percent, who now own half of the entire stock market. But the typical worker's wages have barely grown.

Most Americans haven't earned enough to save anything. Before the pandemic, when the economy appeared to be doing well, almost 80 percent were living paycheck to paycheck.

Lesson: Most Americans don't make enough to save money and build wealth.

So as income inequality has widened, the amount that the few high-earning households save—their wealth—has continued to grow. Their growing wealth has allowed them to pass on more and more wealth to their heirs.

Take, for example, the Waltons—the family behind the Walmart empire—which has seven heirs on the Forbes billionaires list. Their children, and other rich millennials, will soon consolidate even more of the nation's wealth. America is now on the cusp of the largest intergenerational transfer of wealth in history. As wealthy boomers pass on, somewhere between $30 to $70 trillion will go to their children over the next three decades.

These children will be able to live off of this wealth, and then leave the bulk of it—which will continue growing—to their own children … tax-free. After a few generations of this, almost all of America's wealth could be in the hands of a few thousand families.

III. Why wealth concentration is a problem

Dynastic wealth concentrates power into the hands of fewer and fewer people, who can choose what nonprofits and charities to support and which politicians to bankroll. This gives an unelected elite enormous sway over both our economy and our democracy.

If this keeps up, we'll come to resemble the kind of dynasties common to European aristocracies in the seventeenth, eighteenth, and nineteenth centuries.

Dynastic wealth makes a mockery of the idea that America is a meritocracy, where anyone can make it on the basis of their own efforts. It also runs counter to the basic economic ideas that people earn what they're worth in the market, and that economic gains should go to those who deserve them.

Finally, wealth concentration magnifies gender and race disparities because women and people of color tend to make less, save less, and inherit less.
The typical single woman owns only 32 cents of wealth for every dollar of wealth owned by a man. The pandemic likely increased this gap.

The racial wealth gap is even starker. The typical Black household owns just 13 cents of wealth for every dollar of wealth owned by the typical white household. The pandemic likely increased this gap, too.

In all these ways, dynastic wealth creates a self-perpetuating aristocracy that runs counter to the ideals we claim to live by.

IV. How America dealt with wealth inequality during the First Gilded Age

The last time America faced anything comparable to the concentration of wealth we face today was at the turn of the 20th century. That was when President Teddy Roosevelt warned that «a small class of enormously wealthy and economically powerful men, whose chief object is to hold and increase their power» could destroy American democracy.

Roosevelt's answer was to tax wealth. Congress enacted two kinds of wealth taxes. The first, in 1916, was the estate tax—a tax on the wealth someone has accumulated during their lifetime, paid by the heirs who inherit that wealth.

The second tax on wealth, enacted in 1922, was a capital gains tax—a tax on the increased value of assets, paid when those assets are sold.

Lesson: The estate tax and the capital gains tax were created to curb wealth concentration.

But both of these wealth taxes have shrunk since then, or become so riddled with loopholes that they haven't been able to prevent a new American aristocracy from emerging.

The Trump Republican tax cut enabled individuals to exclude $11.18 million from their estate taxes. That means one couple can pass on more than $22 million to their kids tax-free. Not to mention the very rich often find ways around this tax entirely. As Trump's former White House National Economic Council director Gary Cohn put it, «only morons pay the estate tax.»

What about capital gains on the soaring values of wealthy people's stocks, bonds, mansions, and works of art? Here, the biggest loophole is something called the «stepped-up basis.» If the wealthy hold on to these assets until they die, their heirs inherit them without paying any capital gains taxes whatsoever. All the increased value of those assets is simply erased, for tax purposes. This loophole saves heirs an estimated $40 billion a year.

This means that huge accumulations of wealth in the hands of a relatively few households can be passed from generation to generation untaxed—growing along the way—generating comfortable incomes for rich descendants who will never have to work a day of their lives. That's the dynastic class we're creating right now.

Lesson: The estate tax and the capital gains tax have been gutted.

Why have these two wealth taxes eroded? Because, as America's wealth has concentrated in fewer and fewer hands, the wealthy have more capacity to donate to political campaigns and public relations—and they've used that political power to reduce their taxes. It's exactly what Teddy Roosevelt feared so many years ago.

V. How to reduce the wealth gap

So what do we do? Follow the wisdom of Teddy Roosevelt and tax great accumulations of wealth.

The ultra-rich have benefited from the American system—from laws that protect their wealth, and our economy that enabled them to build their fortunes in the first place. They should pay their fair share.

The majority of Americans, both Democrats and Republicans, believe the ultra rich should pay higher taxes. There are many ways to make them do so: closing the stepped up basis loophole, raising the capital gains tax, and fully funding the Internal Revenue Service so it can properly audit the wealthiest taxpayers, for starters.

Beyond those fixes, we need a new wealth tax: a tax of just 2 percent a year on wealth in excess of $1 million. That's hardly a drop in the bucket for centi-billionaires like Jeff Bezos and Elon Musk, but would generate plenty of revenue to invest in healthcare and education so that millions of Americans have a fair shot at making it.

One of the most important things you as an individual can do is take the time to understand the realities of wealth inequality in America and how the system has become rigged in favor of those at the top—and demand your political representatives take action to unrig it.

Wealth inequality is worse than it has been in a century—and it has contributed to a vicious political-economic cycle in which taxes are cut on the top, resulting in even more concentration of wealth there—while everyone else lives under the cruelest form of capitalism in the world.

We must stop this vicious cycle—and demand an economy that works for the many, not one that concentrates more and more wealth in the hands of a privileged few. 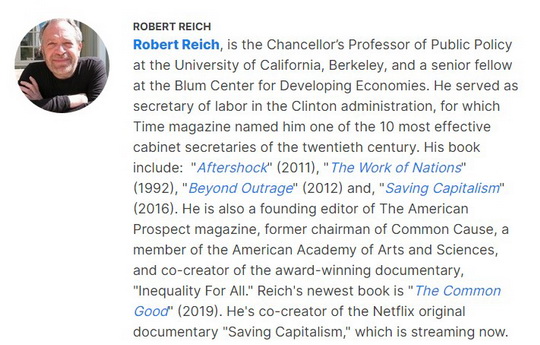 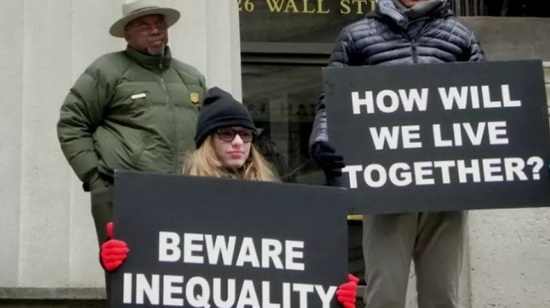