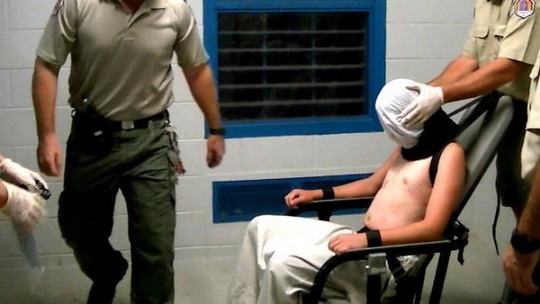 It almost defies belief that in supposedly civilized Australia there is a prison system that locks up 10 year olds and places children as young as thirteen in solitary confinement. “This is barbarism, this is inhumane, this is child abuse,” a lawyer told a television reporter on the investigative journalism programme “Four Corners” of the Australian Broadcasting Corporation. The 51-minute programme can be watched in full here. In the Northern Territory Aboriginal children have been confined to an isolation wing with no access to sunlight or running water. Some were held for weeks on end, deprived of basic necessities. Young offenders have been stripped naked, assaulted and tear-gassed.

“They had absolutely nowhere to run…Those children were afraid for their lives,” a children’s advocate tells the reporter.

“Those cells were ghoulish, they were something medieval,” observes a lawyer. “We all sort of looked at each other in shock… there were signs of life in there but we didn’t know who was in there or what was happening, or how long they’d been there.”

“What’s going on with children in detention here is a deliberate, punitive, cruel policy.”

Held by a system that seems bent on breaking children instead of reforming them.

“If I treated my children like that, the authorities would take my children from me quite properly because I would be behaving cruelly to them,” said a lawyer representing a young victim.

The confronting investigation sent shockwaves around Australia. “Australia’s Shame” aired on Monday 25 July and replayed on the following two days.

The shocking images and other details of the treatment of children in correctional facilities prompted a “deeply shocked” conservative Prime Minister Malcolm Turnbull, who was re-elected on 2 July, to quickly call for a Royal Commission into the treatment of children at the Don Dale Youth Corrections Centre in Darwin, where the footage was collected. Aroyal commission is the highest-level of public inquiry in Australia.

The Northern Territory Chief Minister, Adam Giles, today removed John Elferink as Corrections Minister, taking over the role himself. But Elferink stays as Attorney General, the government’s chief law officer (akin to justice minister), and holds on to the mental health, justice, and family and children’s health portfolios.

Addressing reporters in Darwin, Giles blamed the scandal on a “culture of cover-up” within the territory’s juvenile corrections system.

Amnesty International Australia called the abuses “a shocking violation of both the UN Convention on the Rights of the Child and the Convention against Torture”.

“The Australian Government must immediately launch an investigation into the Northern Territory youth detention system, and take action to prevent the abuse of children in youth detention across Australia.”

“Watching the programme was harrowing. To see a crying, distressed child seized by his neck, forced to the ground, manhandled, stripped naked by three grown men and left naked in a cell is just sickening,” said Julian Cleary, Indigenous Rights’ Campaigner at Amnesty International Australia. “The footage of guards laughing at a child being tear-gassed and in distress defies belief.”

“Amnesty International has repeatedly raised concerns of abuse of children being held in youth detention centres in the Northern Territory. As this program shows, these are not isolated incidents. The NT Government has failed to deal with systemic issues with the treatment of children in its youth detention system,” Cleary said.

The lawyers write: “According to the programme, this abuse is perpetuated at every level of the system: the officers employed to care for these children instead bully and brutalise them, and the highest levels of the NT government have apparently obfuscated the extent and nature of what is taking place. Only a Royal Commission will be able to uncover the depth of this maltreatment.

“Ninety-five percent of NT detainees are Indigenous. The Four Corners program shows that our most vulnerable are being disproportionately incarcerated and also irreversibly physically and psychologically abused.”

“If one of us were to have been found to have treated our children in this way we would probably be charged with a criminal offence and the children would be taken away from us. It’s an extremely distressing piece of footage to look at and I have visited many detention centres, sadly.

Triggs said a formal inquiry would determine whether charges should be laid against people involved, but she said it appeared the guards were “ill-trained or not trained at all”.

Joshua Creamer is one of only about a dozen Indigenous barristers in Australia who has defended a number of Indigenous children in criminal matters.

He writes: “As juvenile detention centres move to recruit more and more officers with military and police backgrounds, who are combat trained and are often desensitised to violence, coupled with less and less focus on pastoral care and cultural values – many children are quite literally living in hell.

“In the last twelve months I have heard reports of horrific levels of violence committed against our young people in detention, resulting in broken limbs, psychological abuse and many other serious injuries. The question I always ask myself is why? Especially when we see examples like in the Netherlands where the system is targeted at rehabilitation and social integration, a system so successful the government is closing prisons through lack of use.

“The end result is, we have a system that is failing our kids. It is Indigenous children who represent about 80 per-cent of children in custody, who are affected the most.”

A coalition of Northern Territory lawyers, academics, youth service providers and charities will push for sweeping reform to the Territory’s law and order system, in the hope of undoing many so-called “tough on crime” initiatives.

A six-point election wishlist from the Make Justice Work organisation calls for the repeal ofmandatory sentencing, a comprehensive alcohol plan, a reduction in the number of young people being locked up, more community-based justice programs and an Aboriginal Justice Agreement.

Criminal Lawyers Association NT president Russell Goldflam said repealing mandatory sentencing was “among the least controversial” reforms among members of his association, which represents both prosecutors and defence lawyers and which is among 24 organisations backing the campaign.

Mandatory jail sentences for relatively minor crimes have been introduced by both the government and Opposition, despite most studies questioning their effect in reducing crime.

She said politicians from both major parties had become attracted into “easy to sell” but ineffective law and order policies. “The lawyers are right, you have got to understand that we have the expertise in this area,” Ms Gerry said.

She said the Territory’s growing prison population was evidence that longstanding approaches had failed, and a greater focus on rehabilitation was needed.

Jesuit Social Services Central Australia manager John Adams said things had become worse over the past four years, as youth programmes were cut, downsized and in some cases reinstated.

“It’s hard to build a relationship with an at-risk child when programs are cut and then re-funded later on,” he said.