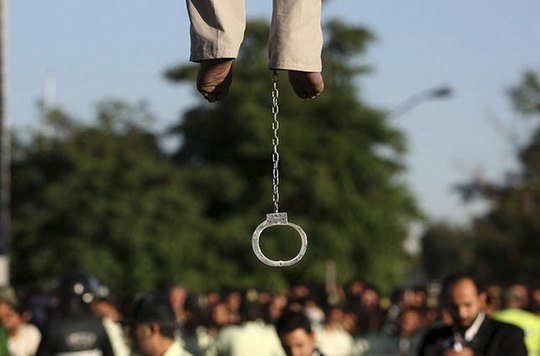 Iran is the world's most prolific executioner of offenders convicted while juveniles, Amnesty International said Tuesday, accusing the Islamic republic of using torture and ill-treatment to extract confessions from minors.

The rights group said Iran «tops the grim global table of executioners of juvenile offenders» with 73 recorded executions between 2005 and 2015, including at least four last year. «Iran is one of the few countries that continues to execute juvenile offenders in blatant violation of the absolute legal prohibition on the use of the death penalty against people under the age of 18 years at the time of the crime,» said Amnesty's Middle East deputy director, Said Boumedouha.

London-based Amnesty said most of the known such executions in Iran were for murder, rape, drug-related offences and a national security-related offence known as «enmity against God». Iranian judiciary chief Ayatollah Sadegh Larijani said in 2014 that «we have no execution of people under the age of 18.»

Amnesty said Iran never officially announces when a person convicted while a juvenile is executed. U.N. figures released in 2014 showed at least 160 people under 18 on death row in Iran.

Amnesty's 110-page report gives the names and locations of 49 juvenile offenders currently facing execution. But it said it believes the real number to be higher than the U.N. figure as «information about the use of the death penalty in Iran is often shrouded in secrecy.»

The group also accused Iran of breaking international law by failing to close a penal loophole allowing a judge to decide that girls as young as nine and boys as young as 15 bear full criminal responsibility — potentially exposing them to capital punishment.

It said the report shows that young people condemned to death in Iran spend seven years on death row on average before being hanged — «though in some cases juvenile offenders have spent over a decade on death row.»

«The report paints a deeply distressing picture of juvenile offenders languishing on death row, robbed of valuable years of their lives — often after being sentenced to death following unfair trials, including those based on forced confessions extracted through torture and other ill-treatment,» Boumedouha said.

Although Iran has signed international conventions on child rights and in recent years introduced special child courts, Amnesty urged it to stop sentencing minors to death. «Instead of introducing half-hearted reforms that fall woefully short, Iran's authorities must accept that what they really need to do is commute the death sentences of all juvenile offenders, and end the use of the death penalty against juvenile offenders in Iran once and for all,» Boumedouha said.

International rights group Reprieve also issued a statement Tuesday to coincide with President Hassan Rouhani's trip to Italy and later France. «Concerns have been raised that new cooperation agreements between Europe and Iran could contribute to a surge in drug-related executions — including of juvenile offenders,» Reprieve said.

Tehran this month finalized a landmark deal with world powers over its disputed nuclear program in an accord many observers say could help end its isolation from the West. But it remains accused of serious rights violations. Iranian President Hassan Rouhani met with Pope Francis in Rome yesterday, which is the first meeting between a pope and an Iranian president since 1999. He headed to Paris on the second leg of a trip signaling the dramatic rapprochement between Tehran and European powers since the lifting of sanctions against Iran.

Amnesty alleged that Iran was carrying out unfair and improper trials of minors accused of capital offences, and using incommunicado detention, solitary confinement and torture. It documented a «disturbing escalation» in the number of overall death sentences in Iran last year, with at least 830 people executed between Jan. 1 and Nov. 1, 2015. Iran is behind only China in the total number of annual executions it carries out, the watchdog said. Maya Foa, head of the death penalty team at Reprieve, said Iran's government was «overseeing a horrifying surge in executions, the vast majority for drugs offences.»

Previously, the United Nations also warned that the number of executions in Iran have been rising exponentially since 2005, which Mohammad Javad Larijani, the Head of Iran's Human Rights Council, dismissed in October, 2015.