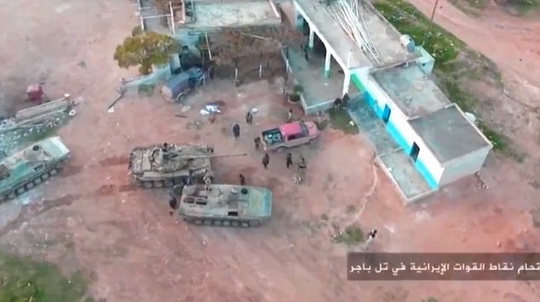 By Stephanie Linning for MailOnline

A terrifying propaganda video released by a jihadist group with links to Al Qaeda purportedly shows Iranian forces fleeing from jihadists as they advance on a stronghold town in northern Syria. The Nusra Front released the three-minute clip made up of footage taken from GoPro cameras attached to a tank and a drone.

The effect is a video that has chilling echoes of first-person shooter video games like Call of Duty.

A coalition of rebels, including the Nusra Front, announced on Saturday that they had taken back control of Tal Bajer in the countryside south-west of Aleppo, after losing it to Syrian troops backed by Lebanese Hezbollah fighters and Iranian forces two weeks ago.

The video purports to capture the operation that led to them reclaiming the town, showing Iranian forces fleeing as the extremists advance.

It was released on Sunday by the group's media wing, White Minaret.

A drone shot shows a tank pulling into what appears to be a jihadist base in an area of scrubland. A number of armed fighters dressed in black come out and pile into tanks and vehicles parked outside.

The jihadists set off into the desert, their mission to kill Iranian troops captured from the drone flying hundreds of metres overhead.

Other shots are taken on a GoPro attached to the barrel of a large gun on one of the tanks, showing the devastation it causes as it runs into the town.

Sound effects of heavy gunfire have been added to the video, adding to the cinematic feel. 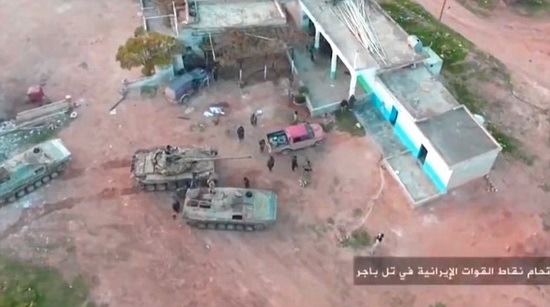 Chilling: Part of the propaganda video was shot on a GoPro camera attached to a drone flying overhead 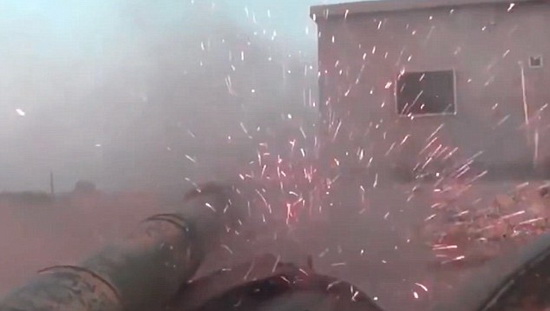 Destruction: Another camera, attached to a gun mounted on a tank, shows the gunfire in the town

The region has been the scene of prolonged and intense fighting.

At least 23 fighters were killed in clashes between the Kurdish-led alliance and Islamist rebels on Sunday, according to the Syrian Observatory for Human Rights.

The assault, near the Turkish border region of Azaz, prompted sporadic fighting that drew in the SDF and also saw Al Nusra and its allies fire rockets at a Kurdish district of Aleppo city.

Syria's Kurds have long had tense relations with parts of the armed opposition, particularly its hardline elements.

The minority never joined the armed uprising against President Bashar al-Assad, despite having been oppressed by his regime.

It has refused to allow rebels to stage operations from Kurdish-majority regions, from which the regime withdrew in 2012, and has focused instead on building political and security autonomy. 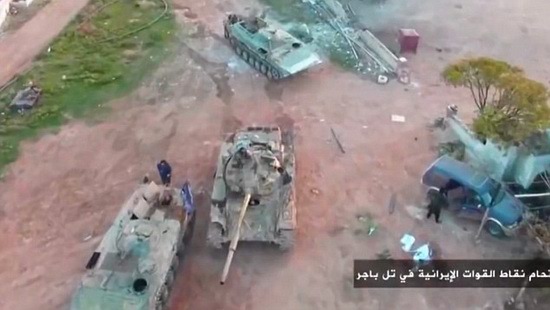 Base: The video starts with tanks pulling into a building, where armed fighters are waiting 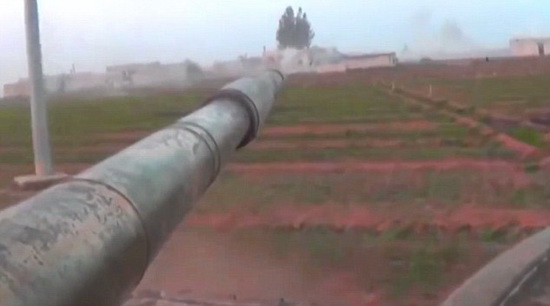 Assault: The video purports to show Iranian forces fleeing as the jihadists advance on the town, pictured

The Kurds accuse Turkey of backing some of Syria's Islamists and Ankara has often warned it will not allow the establishment of an autonomous Kurdish region on its border.

However, the YPG, the main Syrian Kurdish armed group, has played a key role in fighting the Islamic State jihadist group in north and northeast Syria.

It has also allied with small Arab rebel groups, like Jaish al-Thuwwar, and recently announced the Syrian Democratic Forces coalition, which groups the YPG with Christian and Arab Sunni Muslim forces.

The US-backed alliance has so far mostly been active in the northeastern province of Hasakeh, where it has captured some 200 villages from IS in recent weeks.