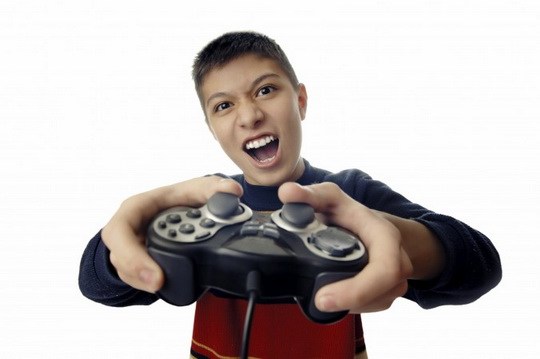 From television, to war toys, to the latest Hollywood blockbuster, kids today soak up an enormous amount of violent imagery. Although most of it is pretend violence, research suggests it still may be profoundly shaping the minds and spirits of our young people. More than 3,000 studies point to a strong correlation between violent media consumption and aggressive behavior.

People have been calling for limits to television violence since the 1950s, but on-screen brutality and bloodshed has only increased with time. According to a 2003 report, the average American kid will have witnessed 200,000 acts of violence, including 40,000 murders by the time he or she turns 18.

According to Jan Arnow, author, and internationally renowned expert on the effects of violence and conflict resolution, we live in a culture where kids are in essence being trained to hate and fear.

“If you look back at the television, movie, and video game line-up about 10 years ago it wasn’t as bad. But we as a culture grow desensitized so they have to ratchet it up in order to gain our attention back. It does go up every year,” she said.

Arnow first became concerned with escalating media violence over 30 years ago when she was raising her own kids. She worried about what would happen if the trend continued.

So she traveled the world interviewing young people who lived in regions of war and conflict—Palestine, Israel, the Soviet Union, and Northern Ireland—to see how the experience shaped their worldview. The common thread was that none of them could envision a future for themselves.

Researchers have found that our cultural obsession with violence and conflict has reached a saturation point where American kids are developing a similarly hopeless outlook. In one recent study, more than 60 percent of children worried they might be killed, and 19 percent sometimes wished they were already dead.

“This is exactly what we’re seeing now,” Arnow said.

Some studies suggest that the more violent media kids are exposed to, the more they’re apt to think of violence as a socially acceptable way to deal with problems. Each day, about 2,000 kids are attacked at school, and almost 200,000 miss school because they fear an attack.

Some schools are addressing the problem by getting tougher on bullying. But just like laws against shootings, hate crimes, and domestic abuse, Arnow says these efforts miss the root of the problem.

“We are addicted to direct violence. It’s what sells television time. It’s what sells advertising. It’s what sells movies, video games—it’s all of that. And yet when we try to abate it, we’re chipping away at the tip of the iceberg,” she said. “We have to go down as far as possible, to places that we may not see to address the issues at the lowest level possible—the cultural level.”

Violent media has been gradually expanding in American culture for decades, so the effects here may be harder to catch. But in Cuba, where exposure is relatively new, the trend has been unmistakable.

Arnow was surprised when she was asked to facilitate a conflict resolution program in Cuban schools, because she’d heard that they had no issue with school violence. But administrators told her that all changed with access to video games.

“They said, ‘We didn’t have a problem until the people who left started coming back with video game consoles and the violent games,” Arnow said. “They could see an uptick in violence, bullying, and unresolved conflict in their schools. That said everything to me.”

In her new book , “In the Line of Fire: Raising Kids in a Violent World,” Arnow offers over 400 useful tips that she says can help protect children from damage.

One key piece of advice is helping children develop media literacy. According to Arnow, young people who acquire these skills, even if they consume violent media, will be less apt to be influenced by it.

Developing such skills requires some adult guidance and participation. Arnow urges parents to “find the moral in the madness” by watching the programs their kids watch, playing the video games their kids like to play, and then getting them to think critically about what they see.

One method Arnow used on her own kids proved very effective. “I gave them notebooks, and I said, ‘We’re going to watch TV all week,’ which of course they loved. I had them write down every racist remark that they heard. Another kid I had do the same thing with violence. And they each checked their notebooks while they watched television for a week,” she said. “They were astounded as young kids, as 12- and 10-year-olds, how much stuff was going right by them but really going right to them. From that time on they were much more careful when listening or watching anything.”

Arnow says it’s not necessary to do these exercises all the time, but once in a while they can have a big impact. “Try some things out to get them to understand,” she said. “To be media literate is going to help them all of their lives.”

About ‘In the Line of Fire’

Arnow’s book is organized into factoid lists, relevant quotes, and other sidebars that will appeal to casual readers who just want to digest a little at a time. It also offers several web links, tips, and other resources for those who wish to dig deeper into a particular subject.

Chapters cover a diverse range of topics such as hate crimes, the psychology and marketing of war toys, and cyberbullying. While the book is science based, many will oppose some of Arnow’s targets, such as America’s gun obsession. The “Guns Are Us” chapter devotes several pages to confronting prevalent beliefs such as the weapons ownership mantra of “guns don’t kill people, people kill people,” and the notion that armed guards in schools make children safer.

“While no discernible link between safer schools and armed guards has been established, about one-third of our schools already have armed guards on the premises, and the demand for school policing has made it the fastest growing area of law enforcement,” states the book.

“In the Line of Fire” is a book with an ambitious agenda, but its promotion of peace is something we can all learn from. The future it anticipates is one we can’t afford to ignore.

“The kids raised today are going to be our future leaders,” Arnow said. “If they believe that violence is a suitable strategy for dealing with conflict it’s a scary prospect.”

A Few Facts about Violence Culture

The United States manufactures more firearms than any other nation, yet demand here is so high that on top of the over 6.5 million domestically manufactured guns purchased in 2011, Americans bought an additional 3.25 million imported from other countries, according to records from the U.S. Bureau of Alcohol, Tobacco, Firearms, and Explosives.

Half of the 10 top-selling video games in the United States are described as “first-person shooter” games, where a gamer primarily guns down opponents.

In the interest of authenticity (or product placement) some first shooter video games featured a detailed list of actual firearms that could be purchased in the real world. These lists were removed following the Newtown massacre in 2012.

The biggest ever opening blockbuster in the spring of 2013 wasn’t a movie, but a game. Grand Theft Auto VI recorded sales of $310 million on its first day.

Gunshots are the second leading cause of death among children ages 1 to 19, and the number one cause among black children.