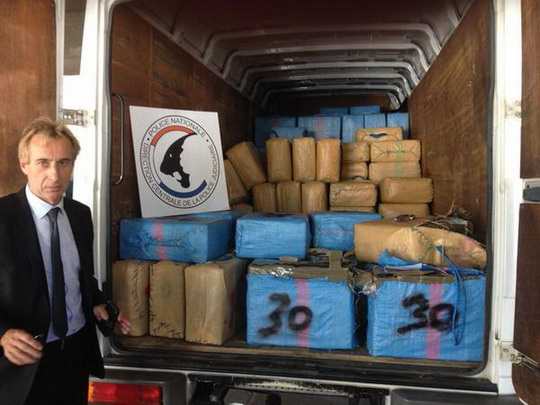 French police have seized 5.8 metric tons (around 12,780 pounds) of cannabis resin — known as hashish — and arrested three men in a major drug bust near the southeastern port town of Marseille, the French interior ministry said in a statement. The arrests follow months of investigation by the Marseille judicial police, working in collaboration with the Central Office for the Repression of Illicit Traffic of Narcotics (OCRTIS), and Spanish and Moroccan police.

On a visit to the South of France Monday, French Interior Minister Bernard Cazeneuve congratulated investigators on their «major success» and called the seizure, which is the biggest since 2011, «exceptional.»

When contacted by VICE News, the two police agencies involved in the bust declined to comment at this stage in the investigation.

The drug bust marks one of the biggest seizures in recent years for French police. The drugs have an estimated street value of 15 million Euros ($16.6 million). According to sources, the drugs were destined to the local market, in and around Marseille.

According to the European Monitoring Centre for Drugs and Drug Addiction (EMCDDA), French police officers intercepted over 157 tons of drugs in France in 2014 — 80 percent more than in 2013.

With 1.4 million regular users, France is the biggest market for cannabis in Europe, ahead of Spain and the Czech Republic. Conveniently located at the crossroads of North Africa and the rest of Europe, the country is a major transit point for drugs entering the continent.

In a report published in June 2015, the French Observatory for Drugs and Drug Addiction (OFDT) reported a growing trend for cannabis consumption in France. According to the agency, some 158,000 cannabis plants were seized and destroyed by French police in 2014 — the highest number ever observed. The study also found that the level of cannabis potency — the THC content — has risen dramatically in recent years and is today at its highest in 15 years.

According to the report, drug traffickers have found new ways to transport drugs from North Africa to Europe, including the «go-slow» method of shipping the drugs by boat from Libya — as opposed to the «go-fast» technique, which involves driving cars laden with drugs across Spanish and French motorways.

Speaking from Marseille this afternoon, French President François Hollande said the authorities were still trying to track down the three suspects' accomplices.