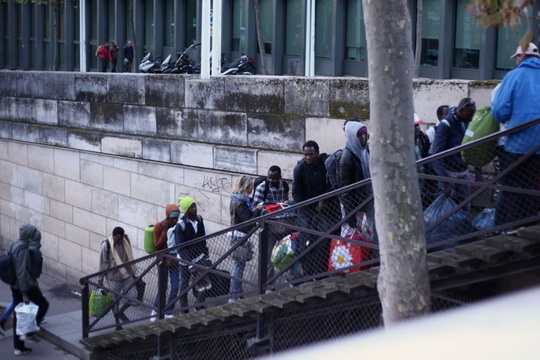 Paris police have dismantled two makeshift camps in the French capital, moving hundreds of migrants to shelters in the city and the surrounding area in the process. Authorities say 801 people were evacuated in the two operations, which targeted a camp near the Gare d'Austerlitz train station in southeast Paris and another outside the 18th arrondissement town hall in the north of the city.

VICE News was on the ground to witness the peaceful evacuation of the Austerlitz camp, which began at 6 AM on Thursday. According to migrant support groups, some 400 people were living in the camp, many of them Sudanese and Eritrean.

The camp is steps away from the City of Fashion and Design, a massive cultural complex. 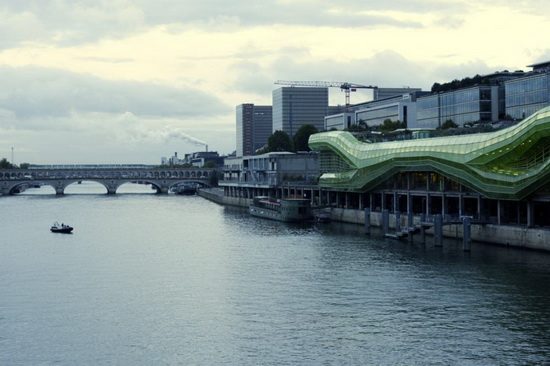 A police boat monitors the evacuation of migrants in the early hours of Thursday. The green glass-fronted structure is the City of Fashion and Design (Cité de la Mode et du Design) — a huge cultural complex under which hundreds of migrants have pitched their tents. 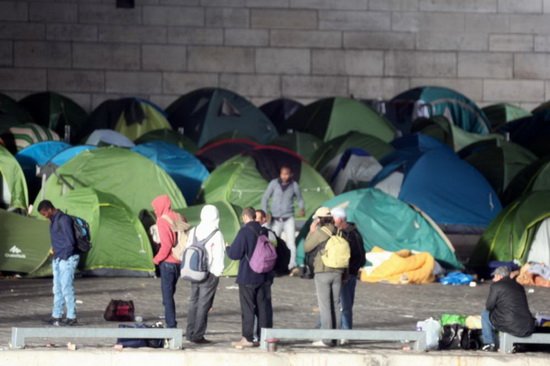 Charity workers talk to migrants camping under the Charles de Gaulle bridge, steps away from the City of Fashion and Design. 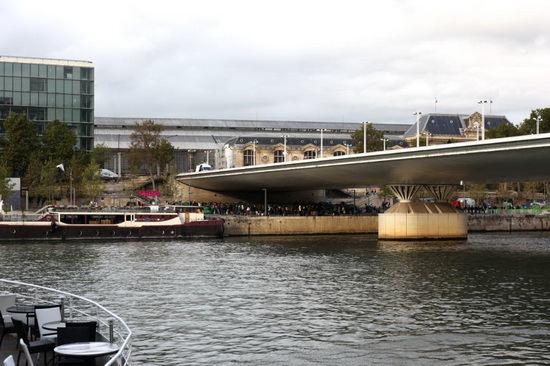 Dozens of migrants, law enforcement officers and reporters gather under the Charles de Gaulle bridge as migrants prepare to board the buses that will take them to shelters in and around the city.

Charity workers had been assisting the migrants for months, helping to prepare them for evacuations that they have been expecting since June, when police razed what was then considered to be the capital's biggest slum.

«We've been explaining things to those who live here since June,» said Valérie Thomas, who joined the Austerlitz migrant support committee four months ago. "They are happy to leave, some of them have been here for 18 months. They had almost lost hope that the evacuation would take place today."

The committee convinced city officials to let them ride with migrants on the buses taking them to the shelters.

«We've had meetings [with migrants] on the wharf, and they were the ones who asked if we could board the buses with them,» explained Thomas. «We want to see where they are taken and to not lose contact with them.»

The committee also persuaded the city to let volunteers oversee Thursday's evacuation and to help migrants onto the buses.

«The police have to be present because there was an official evacuation order, and we've told the people in this camp that if they refused to leave, the police can force them to go,» said Thomas. «But we wanted them to intervene as little as possible.»

While few police officers were deployed around the camp, several buses of riot police were stationed at a distance. 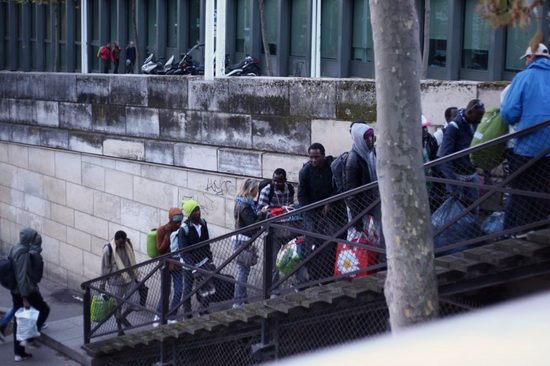 Carrying plastic bags and sleeping bags, migrants pour out of the camp to board the buses that will take them to shelters. 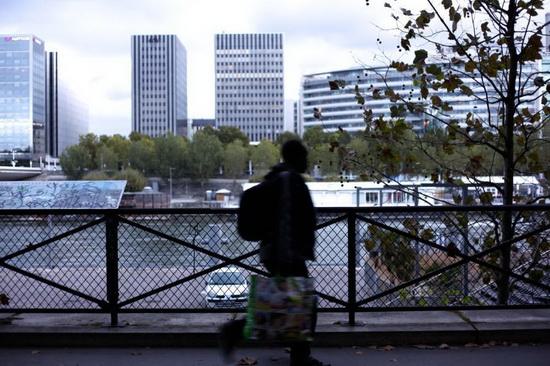 One of the migrants leaves the camp and heads towards the buses.

Migrants gathered their belongings and evacuated the camp calmly. A group of 12 or so migrants refused to board a bus that had only 10 free seats, preferring to wait for the next bus to make sure that they were taken to the same shelter.

«All the minors left together on the first bus,» Thomas noted.

Pascal Brice, the head of the French Office for the Protection of Refugees and Stateless Persons, addressed migrants in the early hours of Thursday, inviting them to board one of nine buses chartered to take them to shelters in and around Paris. «You will be given food and government representatives will come and help each and every one of you,» he said.

Local authorities handed out pamphlets in French, English, and Arabic to migrants waiting under the bridge.

«If you wish, you can be taken to a housing center run by a charity,» the pamphlets read. «You will be housed long enough for you to gain access to information, for your situation to be evaluated… and for you to file an asylum claim if you wish to do so…. The shelter will provide you with housing and three meals a day.» 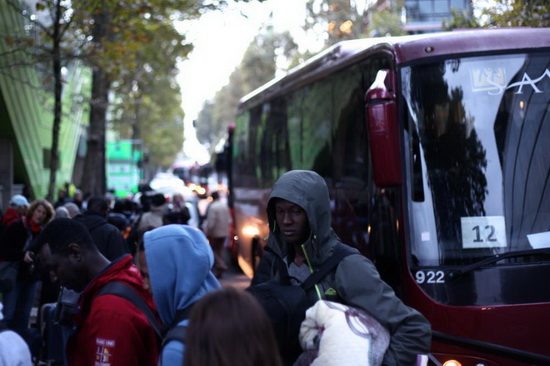 Migrants who want to end up in the same shelter gather together in front of the buses. 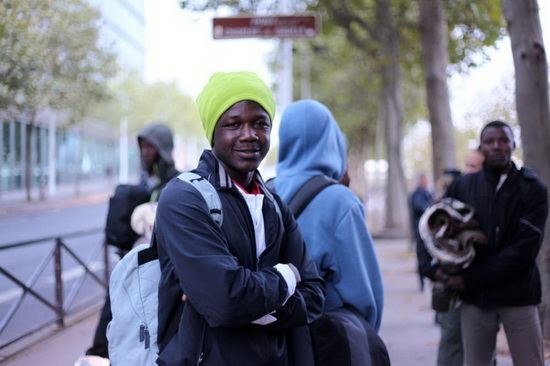 It's a bittersweet morning for migrants like this young Sudanese man, who is relieved to be leaving the camp but anxious to know what will happen to them next. 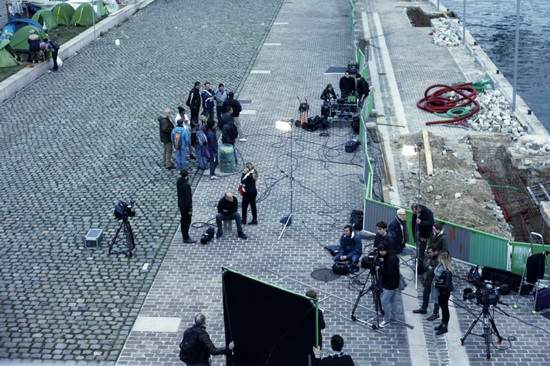 The set of French television show Complément d'enquête, which was being shot that day to the backdrop of the evacuation.

Five miles away, 150 people were being calmly evacuated from a camp outside the 18th arrondissement town hall. 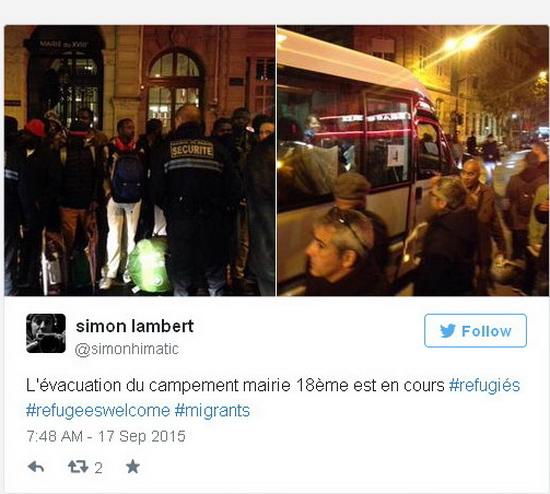 French Prime Minister Manuel Valls announced during a debate in the National Assembly on Wednesday that he would «not hesitate» to restore border controls in order to reduce the flow of migrants entering the country. His remark came days after Germany imposed its own emergency border controls.

The European parliament voted Thursday in favor of relocating some 120,000 refugees who are currently living in Italy, Greece, and Hungary to places across the European Union. The emergency vote was organized after EU interior ministers failed to back a migrant quota scheme on Monday.

Interior ministers are due to meet again on September 22 to discuss the measure. In a statement released Thursday, the European Commission urged EU ministers to approve the relocation.

«Now is the time for action,» it said.