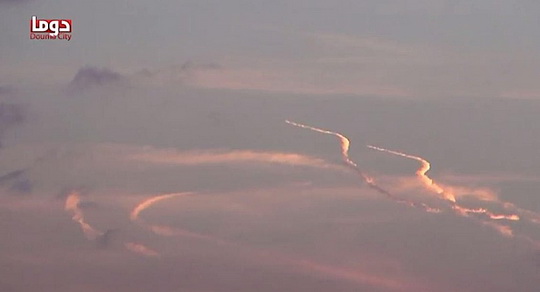 On Dec. 7, the Israeli air force carried out a series of surgical air strikes inside Syria. Such strikes are not uncommon in Syria and Lebanon—the Israelis frequently attack convoys carrying weapons to Hezbollah militants in Lebanon and to and degrade Syrian regime forces in southwestern Syria.

But the Dec. 7 strike was fairly unique. For one, much of the air raid was captured on camera. And the video and photographic evidence reveals some very interesting Israeli tactics.

Two formations of Israeli fighter jets, each consisting of two F-15s, entered Syrian airspace at 1600 local time from the direction of Lebanon, heading from west to east toward Damascus at high altitude and high speed.

The wide spacing between the Israeli jets—both within each two-ship formation and between the two separate pairs—is noteworthy. There’s a good probable cause for this arrangement.

In the absence of passive radars and an integrated air defense network, Syrian systems could probably still track the azimuth and elevation of incoming jamming signals via their own receivers—albeit with a considerable error margin.

That data could cue Syrian missile batteries’ optical sensors and allow the operators to fire toward the intruders. The spacing between the Israeli F-15s made the error margins overlap and thus made the Syrians’ direction-finding even less accurate, buying valuable time for the planes to get close to their targets.

Even under heavy jamming, Syrian Buk-M2 missile batteries stationed at Mezzeh airport managed to fire two missiles toward the first formation. The Israelis responded with a simple move—they changed direction.

In long-distance shots, medium-range surface-to-air missiles predict a point of impact ahead of incoming aircraft and travel a ballistic trajectory to reach that point. In the last phase of flight, the missile would correct its trajectory using its seeker. A significant change in the target’s direction would mean that the missile would not find the aircraft in the predicted zone.

The first formation of F-15s drew the Syrian missiles toward themselves then turned toward north and released their weapons, striking a small airstrip called Al Sharai in Dimas region west of Damascus. The first formation then made a hard turn to the west and returned to Lebanese skies.

Not far behind, the second formation had already entered Syria.

The pair of F-15s approached Damascus head on—this time the Buk-M2 battery apparently waited for the intruders to change their direction or close in.

The Israeli F-15s released their standoff weapons and made a hard left turn toward the south. Two more Syrian missiles snaked into the sky—the contrails indicating SA-3s. These missiles weren’t aiming for Israeli jets but for the missiles they had fired.

One of the SA-3s hit its target. The wreckage of a Popeye guided missile fell to the ground. The Popeye is a stand-off missile with a warhead weighing 700 pounds. It uses combination of infrared imagery and inertial guidance to precisely attack targets up to 50 miles away from the launch point. 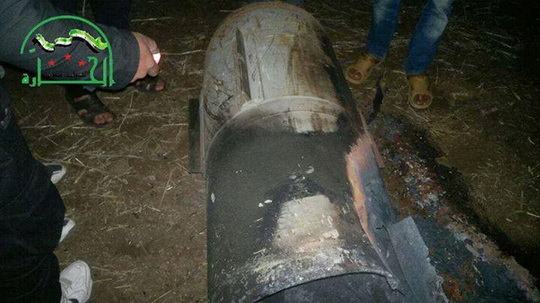 The surviving missiles from the second pair of F-15s struck vehicles and supplies on a ramp at Damascus’ international airport.

It’s interesting that the Israelis used Popeyes. The Israeli air force also possesses the more modern Spice guided weapons that use a combination of GPS and laser guidance.

Lebanese media, including Al Menar TV, reported Israeli jets—probably a reserve force—circling over Lebanon for approximately 30 minutes after the attack, possibly waiting to attack again, if any targets survived.

Israeli fighters carried out a daring mission in broad daylight. The inclusion of Popeye missiles betrays the mobile nature of the targets. Whatever they were, it’s possible they were ready to leave the two airports and scatter in different directions.

The raid was a success for Israel, but it was also risky. An ambush by a lone missile site near the border or a few short-range missiles or guns could have turned the Israeli victory into a defeat.