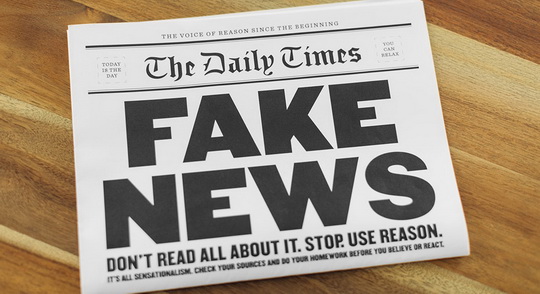 “Fake news” is a widespread phenomenon – not only in wartime, but also in daily political and economic relations. Fake news are not only disseminated by governments and its proxies, but also practiced by the private sector, by media conglomerates, by individuals in their correspondence, gossip, social media and through the internet.

Fake news is as prevalent in Europe as it is in the United States, in Latin America, Africa and Asia. Patently false narratives, false flag operations and bogus incidents are concocted by governments in order to justify their policies, a compliant corporate media acting as echo chambers of the propaganda issued by governments. Purportedly independent journalists (with their own agendas) have no hesitation to print evidence-free allegations, referring to anonymous officials or witnesses, supported by “secret intelligence”. Thus emerges “fragmented truth”, and no one really knows what truth is, everyone clings to his own views, refusing to consider alternative versions of the facts. When it comes to access to reliable information, freedom of opinion and expression, we live in an increasingly polarized, intolerant, intransigent world.

Only reluctantly we must acknowledge that “fake news” have always been around, the difference being that in the past only governments were purveyors of fake news, only governments could successfully manipulate public opinion, whereas today anybody with access to the internet can also weigh in. From experience we also know that all media – CNN, BBC, DW, NYTimes, Washington Post, The Times, The Economist, Le Monde, Le Figaro, the Frankfurter Allgemeine Zeitung, the Neue Zürcher Zeitung, El Pais, El Mundo, RT, Sputnik, CGTN, Asia Times, Telesur – all slant the news in a particular way. They cite their favourite spin doctors and distort the facts, lying here and there, suppressing inconvenient facts and opinions, or shamelessly applying double-standards.

The perception of contemporary events eventually generates “fake history”, which necessarily builds on the steady flow of both verifiable information and fake news. As an aspiring historian taking courses in the Harvard Graduate School of Arts and Sciences (at the same time as I was getting my law degree), as a doctoral candidate in history at the Philosophical Faculty of the University of Göttingen in Germany, I learned to question historical narratives, look at the sources, insist on seven C’s of history writing; chronology, context, coherence, comprehensiveness, causality,comparison and cui bono (who stands to gain from an event and from a particular interpretation). I was taught never to rely on a single source, but proactively to look for alternative views, see whether the standard narrative can be challenged, whether the subsequent publication of previously classified documents, whether the memoirs of movers and shakers, politicians and diplomats suggest the necessity of adjusting in the mainstream narrative.

My research activities for my publications on the Spanish Civil War and on the Second World War and its aftermath convinced me that history textbooks were not all that reliable, that some of them were essentially propagating oversimplifications that ignored crucial facts, that long debunked canards had found their way into the mainstream narrative, sometimes resulting in a caricature of events. My research in public and private archives in the US, Canada, United Kingdom, France, Germany, Switzerland, Spain, my ability to read the original documents in English, French, German, Spanish, Dutch and Russian opened my horizons far beyond the accepted narratives. On the other hand, I realized that archives could be incomplete, that inconvenient documents could have been destroyed, that pertinent information is still classified. Personal interviews with key players like George F. Kennan, Robert Murphy, James Riddleberger, Lord Strang, Lord Paget, Lord Weidenfeld, Lord Thomas, Sir Geoffrey Harrison, Sir Denis Allen, Telford Taylor, Benjamin Ferencz, Howard Levie, Albert Speer, Karl Dönitz, Otto von Habsburg, Kurt Waldheim, added missing links and nuances. I was able to connect the dots.

I also realized that the optimistic expectation that as time passes and emotions abate the historical narrative will become more objective is a sorry illusion. Frequently the very opposite happens, because as the persons in the know disappear, as witnesses die and no one is left to dispute the politically useful narrative, pseudo-history is cemented and emerges as the socially accepted narrative. Extrapolating from my experience researching 20th century historical events, I am convinced that our knowledge of Greek and Roman times, our perception of the Middle Ages, the Renaissance, the Napoleonic ear, must be woefully incomplete. I also realize that it will be very difficult to change the established narratives – absent some extraordinary discovery of previously unknown manuscripts of diplomatic or commercial correspondence, papyrus or cuneiform tablets.

What amazes me is that no one seems to be talking about “fake law”? Indeed, politicians and journalists frequently “invent” law as they go along, contending that what some lobby or interest group invokes as law actually has legal force, as if law and legal obligations could spontaneously arise, without the drafting, negotiation and adoption process of all legislation, treaties, conventions, or without the ratification by Parliaments.

We must beware of the loose use of legal terms, which undermines the authority and credibility of the law. Not every military encounter entails “aggression”, not every massacre constitutes “genocide”, not every form of sexual harassment can be considered “rape”. Nor is every jailed politician a “political prisoner”, nor every migrant a “refugee”. And yet, much hyperbole and political agitation play out on this pseudo-legal arena, much political blackmail is practiced on the basis of fake “law”, much propaganda is actually believed by average citizens. Mundus vult decepi (the world wants to be deceived).

Politicians who want to impose sanctions insist that they are legal, without, however, elucidating the legal basis. In classical international law unilateral coercive measures are not legal. The only legal sanctions are those imposed by the UN Security Council under article VII of the Charter. All other unilateral coercive measures actually constitute an illegal “use of force”, prohibited in article 2 (4) of the Charter, and contrary to article 2 (3), which requires negotiations in good faith.

Moreover, the extra-territorial application of national law (e.g. the Helms-Burton Act) violates numerous principles of the United Nations, including the sovereign equality of states, the self-determination of peoples, freedom of commerce and freedom of navigation. Every day politicians and the media invent their own law – but it is bogus law. Alas, the media simply disseminates the “fake law” as a form of “fake news” – and people believe it.

Some politicians pretend that there is a human right to migration, but fail to give any treaty or doctrinal source. Of course every sovereign state can generously open its border and welcome both economic migrants and refugees, but this opening of frontiers is nowhere required by international law. In fact, the very ontology of a sovereign state since the Peace of Westphalia is that the state controls its frontiers and determines who can and cannot enter its territory. This is customary international law recognized in every textbook.

There is, of course, the UN Convention on the Rights of Migrant Workers and members of their Families, but this Convention applies only to migrant workers who have already entered the territory and have their papers in order. Moreover, the Convention does not establish a right of migration, it only specifies the rights of migrant workers living within the State’s jurisdiction. It should also be noted that only 56 countries have ratified the MWC – not the US, Canada, UK, France, Germany, Italy, Belgium, Netherlands Norway, Sweden, Denmark, Spain etc.

All too often we are confronted by a combination of fake news, fake history and fake law, a very toxic cocktail for any democracy. Alas, fake law has become a favourite weapon of demagogues and phoney “experts” and “diplomats” who gleefully engage in what may be termed “fake diplomacy”, as the goal is not to reach a reasonable negotiated settlement, but rather to score points on the gladiator arena of power-politics, with the dutiful collusion of a sold-out and capricious media.

The unsuccessful encounters between Putin and Biden, between Lavrov and Blinken belong in this category of “fake diplomacy”. Indeed, unless we do away with fake news, fake history and fake law, it will be very difficult to advance with true diplomacy in the sense of George F. Kennan. Thus continues the game of sabre-rattling and sanctions that have brought the world to a situation of armed conflict, which could even degenerate into World War III. In the process many fortunes are being made, since nothing is more lucrative than the arms business, and the military-industrial-financial complex has a economic interest in stoking tensions and war.

Is there a solution to “fake news”? Demagogues would establish an Orwellian “Ministry of Truth”, others would criminalize “fake news” (but only inconvenient “fake news”), others would pretend to filter facts and opinion using self-made tools to determine what is true and what isn’t.

No one needs this kind of Inquisition and censorship, because neither governments nor the private sector can be gatekeepers of the truth. The only solution is ensuring access to pluralistic information and open debate. Society must demand greater transparency at all levels and proactively seek the truth by consulting multiple sources and making a new synthesis, which will not be “revealed truth” or “immutable truth”, but a constantly evolving truth that incorporates the complexity and nuances of reality on the ground.

All of the above raises the question whether we are not already living under a fake democracy? What kind of correlation is there between the will and needs of the people and the laws and regulations that govern them? Is there not a great disconnect between governments and the people? Are there any democratic governments where the people actually can fully take part in the conduct of public affairs as envisaged in article 25 of the International covenant on Civil and Political Rights? Where is the power of initiative and the right to hold referendums recognized? Surely the meaning of democracy must encompass more than the ritual act of going to the polls once every two or four years. Surely the democratic process must allow real choices, not just pro-forma voting for one of two candidates. In my reports to the General Assembly and Human Rights Council I insisted that those individuals who are elected do not really govern, while those who govern are not elected. I deplored the fact that “representative democracy” can only be called democratic if the Parliamentarians represent the electorate, if they proactively inform the electorate and proactively consult with them. As an American I have noted that US elections do not permit real choices, and that we can only exercise the fake right to vote for A or B, knowing that both A and B are committed to the military-industrial complex, that both support Wall Street over Main Street, that both are for capitalism with no frills, and in foreign affairs both are hawks, both are interventionists, both prefer to engage in military interventions than to negotiate in good faith. This ontological disconnect made me conclude that the two-party system we know in the United States is only twice as democratic as the one-party system that rules China. Democracy means rule by and for the people. Alas, we do not enjoy democracy and must content ourselves with the window-dressing, with the pro-forma rhetoric, with the trappings of democracy.

It is time for the American people to demonstrate the courage to demand an end to fake news, fake history, fake law, fake diplomacy and fake democracy. But to achieve that we must first win the information war and defeat those who systematically brainwash the public. It will take time to reform the system, but this is a task we cannot avoid. We owe it to future generations.