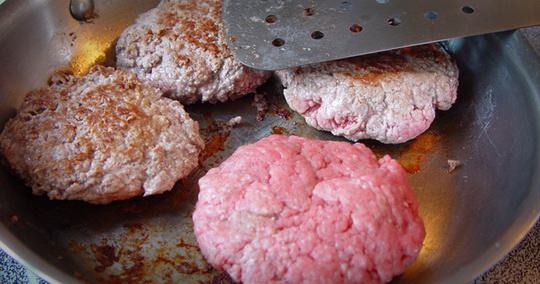 Food is not a commodity, it is not “stuff” put together mechanically and artificially in labs and factories. Food is life. Food holds the contributions of all beings that make the food web, and it holds the potential of maintaining and regenerating the web of life. Food also holds the potential for health and disease, depending on how it was grown and processed. Food is therefore the living currency of the web of life.

As an ancient Upanishad reminds us “Everything is food, everything is something else’s food.”

Good food and real food are the basis of health.

Hippocrates said “Let food be thy medicine.” In Ayurveda, India’s ancient science of life, food is called “sarvausadha” the medicine that cures all disease.

Industrial food systems have reduced food to a commodity, to “stuff” that can then be constituted in the lab. In the process both the planet’s health and our health has been nearly destroyed. 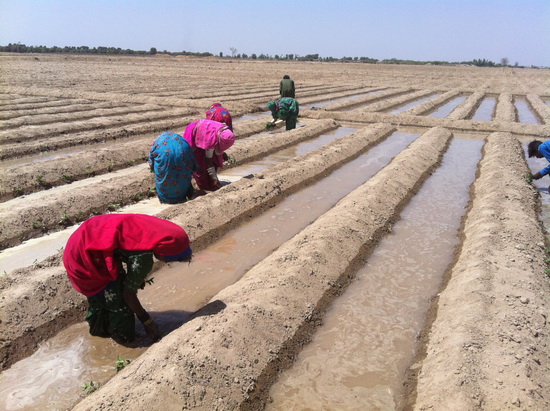 This project aims at enhancing the competiveness of agricultural value chains in Pakistan with a focus on horticulture and livestock including dairy, meat and fisheries. (USAID Agribusiness Project, via Wikimedia Commons)

Seventy five percent of the planetary destruction of soil, water, biodiversity, and 50 percent of greenhouse gas emissions come from industrial agriculture, which also contributes to 75 percent of food-related chronic diseases. It contributes 50 percent of the greenhouse gases driving climate change. Chemical agriculture does not return organic matter and fertility to the soil. Instead it is contributing to desertification and land degradation. It also demands more water since it destroys the soil’s natural water-holding capacity. Industrial food systems have destroyed the biodiversity of the planet both through the spread of monocultures, and through the use of toxics and poisons which are killing bees, butterflies, insects, birds, leading to the sixth mass extinction.
Biodiversity-intensive and poison-free agriculture, on the other hand, produces more nutrition per acre while rejuvenating the planet. It shows the path to “zero hunger” in times of climate change.
The industrial agriculture and toxic food model has been promoted as the only answer to economic and food security. However, globally, more than 1 billion people are hungry. More than 3 billion suffer from food-related chronic diseases.

The mad rush for fake food and fake meat, ignorant of the diversity of our foods and food cultures, and the role of biodiversity in maintaining our health, is a recipe for accelerating the destruction of the planet and our health.

In a recent article “How our commitment to consumers and our planet led us to use GM soy,” Pat Brown, CEO & founder of Impossible Foods, says: “We sought the safest and most environmentally responsible option that would allow us to scale our production and provide the Impossible Burger to consumers at a reasonable cost.”

Given the fact that 90 percent of the monarch butterflies have disappeared due to Roundup ready crops, and we are living through what scientists have called an “insectageddon,” using GMO soya is hardly an “environmentally responsible option.” 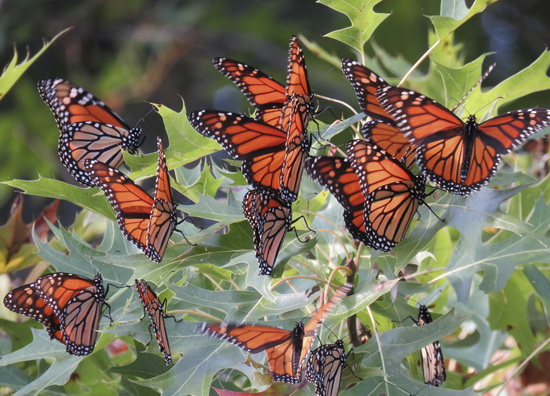 In writing this, Pat Brown reveals his ignorance about weeds evolving to resist Roundup and becoming “superweeds” now requiring more and more lethal herbicides. Bill Gates and DARPA are even calling for the use of gene drives to exterminate amaranth, a sacred and nutritious food in India, because the Palmer Amaranth has become a superweed in the Roundup Ready soya fields of the U.S.

At a time when across the world the movement to ban GMOs and Roundup is growing, promoting GMO soya as “fake meat” is misleading the eater both in terms of the ontology of the burger, and on claims of safety.

The “Impossible Burger” based on GMO, Roundup sprayed soya is not a “safe” option.

Zen Honeycutt and Moms across America just announced that the Impossible Burger tested positive for glyphosate. “The levels of glyphosate detected in the Impossible Burger by Health Research Institute Laboratories were 11 X higher than the Beyond Meat Burger. The total result (glyphosate and its break down AMPA) was 11.3 ppb. Moms Across America also tested the Beyond Meat Burger and the results were 1 ppb.

“We are shocked to find that the Impossible Burger can have up to 11X higher levels of glyphosate residues than the Beyond Meat Burger according to these samples tested. This new product is being marketed as a solution for ‘healthy’ eating, when in fact 11 ppb of glyphosate herbicide consumption can be highly dangerous. Only 0.1 ppb of glyphosate has been shown to destroy gut bacteria, which is where the stronghold of the immune system lies.” 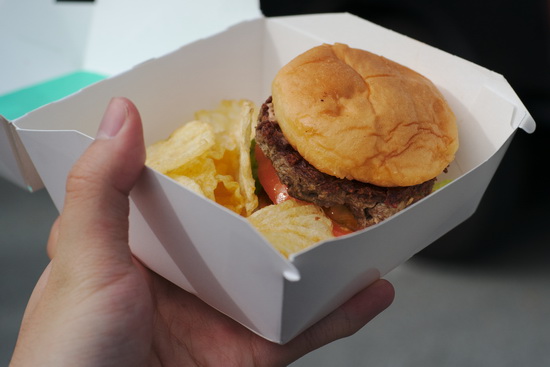 An Impossible Burger given out in 2016 promotional event, San Francisco.
(Dllu, CC BY-SA 4.0, via Wikimedia Commons)

Recent court cases have showcased the links of Roundup to cancer. With the build up of liabilities related to cancer cases, the investments in Roundup Ready GMO soya is blindness to the market.

Or the hope that fooling consumers can rescue Bayer/Monsanto.

There is another ontological confusion related to fake food. While claiming to get away from meat, “fake meat” is about selling meat-like products.

Pat Brown declares “we use genetically engineered yeast to produce heme, the “magic” molecule that makes meat taste like meat — and makes the Impossible Burger the only plant-based product to deliver the delicious explosion of flavor and aroma that meat-eating consumers crave.”

I had thought that the plant-based diet was for vegans and vegetarians, not meat lovers.

Indeed, the promotion of fake foods seems to have more to do with giving new life to the failing GMO agriculture and the junk food industry, and the threat to it from the rising of consciousness and awareness everywhere that organic, local, fresh food is real food which regenerates the planet and our health. In consequence, investment in “plant-based food companies” has soared from nearly zero in 2009 to $600 million by 2018. And these companies are looking for more.

Pat Brown declares, “If there’s one thing that we know, it’s that when an ancient unimprovable technology counters a better technology that is continuously improvable, it’s just a matter of time before the game is over.” He added, “I think our investors see this as a $3 trillion opportunity.”

This is about profits and control. He, and those jumping on the fake-food goldrush, have no discernible knowledge, or consciousness about, or compassion for living beings, the web of life, nor the role of living food in weaving that web.

Their sudden awakening to “plant-based diets,” including GMO soya, is an ontological violation of food as a living system that connects us to the ecosystem and other beings, and indicates ignorance of the diversity of cultures that have used a diversity of plants in their diets.

Ecological sciences have been based on the recognition of the interconnections and interrelatedness between humans and nature, between diverse organisms, and within all living systems, including the human body. It has thus evolved as an ecological and a systems science, not a fragmented and reductionist one. Diets have evolved according to climates and the local biodiversity the climate allows. The biodiversity of the soil, of the plants and our gut microbiome is one continuum. In Indian civilization, technologies are tools. Tools need to be assessed on ethical, social and ecological criteria. Tools/technologies have never been viewed as self-referential. They have been assessed in the context of contributing to the wellbeing of all.

Through fake food, evolution, biodiversity, and the web of life is being redefined as an “ancient unimprovable technology.” That ignores sophisticated forms of knowledge that have evolved in diverse agricultural and food cultures in diverse climate and ecosystems to sustain and renew the biodiversity, the ecosystems, the health of people and the planet.

The Eat Forum, which brought out a report that tried to impose a monoculture diet of chemically grown, hyper-industrially-processed food on the world has a partnership through FrESH with the junk food industry, and Big Ag such as Bayer, BASF, Cargill, Pepsico amongst others.

Fake food is thus building on a century and a half of food imperialism and food colonization of our diverse food knowledges and food cultures.

Big Food and Big Money are behind the Fake Food Industry. Bill Gates and Jeff Bezos are funding startups.

The industrial West has always been arrogant, and ignorant, of the cultures it has colonized. “Fake Food” is just the latest step in a history of food imperialism.

Soya is a gift of East Asia, where it has been a food for millennia. It was only eaten as fermented food to remove its anti-nutritive factors. But recently, GMO soya has created a soya imperialism, destroying plant diversity. It continues the destruction of the diversity of rich edible oils and plant-based proteins of Indian dals that we have documented.

Women from India’s slums called on me to bring our mustard back when GMO soya oil started to be dumped on India, and local oils and cold press units in villages were made illegal.

That is when we started the “sarson (mustard) satyagraha” to defend our healthy cold pressed oils from dumping of hexane-extracted GMO soya oil.

Hexane is a neurotoxin. While Indian peasants knew that pulses, or legumes, fix nitrogen, the West was industrializing agriculture based on synthetic nitrogen, which contributes to greenhouse gases, dead zones in the ocean and dead soils. While we ate a diversity of “dals” in our daily “dal roti” the British colonizers, who had no idea of the richness of the nutrition of pulses, reduced them to animal food. Chana became chick pea, gahat became horse gram, tur became pigeon pea.

We stand at a precipice of a planetary emergency, a health emergency, a crisis of farmers livelihoods. Fake food will accelerate the rush to collapse. Real food gives us a chance to rejuvenate the earth, our food economies, food sovereignty and food cultures. Through real food we can decolonize our food cultures and our consciousness. We can remember that food is living and gives us life.