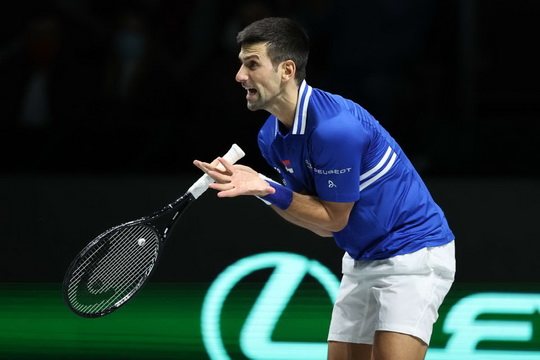 Tennis player Novak Djokovic’s refusal to get vaccinated against COVID-19 — and his subsequent efforts to manipulate Australia’s medical exemption system so as to be allowed a visa to enter the country and compete in the first Grand Slam of the year — is one of the most surreal developments in tennis history. As of this writing, the stubbornly unvaccinated Djokovic is still in Australia, and still slated to play in the championships starting on Monday. Yet, for days now, he’s been hanging on by a thread. On Friday evening, Australian time, Alex Hawke, the country’s immigration minister, decided, for the second time in nine days, to expel him from the country for breaking quarantine rules while infected with COVID, for misleading immigration authorities about his travels prior to entering the country earlier this month, and for becoming a focal point of anti-vaccine sentiment in the country.

Djokovic’s team is appealing, but he is quickly running out of options. It is more than probable that the world’s best tennis player will, just before the Australian Open begins, be unceremoniously dumped onto a plane and told not to return to Australia for at least three years.

The course of events that have unfolded since Djokovic was first detained by immigration authorities on January 5 is an extraordinary example of self-sabotage from one of the sporting world’s most famous figures, who, in recent years, acquired the media nickname “No-Vax Djokovic” for his controversial opinions regarding vaccines.

But, by accident rather than design, Djokovic’s surreal and self-inflicted drama has also served the important purpose of turning global public attention toward the cruel treatment that Australia routinely metes out to undocumented immigrants seeking asylum in the country.

To summarize events to date: Australia — which implemented one of the world’s strictest and longest lockdowns in an effort to emulate China’s zero-COVID stance — has a policy of only letting vaccinated travelers enter the country. Medical exemptions are allowed, but the criteria for these exemptions is narrow. A couple weeks ago, however, Djokovic, a nine-time winner of the Australian Open, boarded a plane to Australia unvaccinated, having been granted an exemption to allow him in.

After a hullabaloo about this, the country’s prime minister, Scott Morrison, went on a very public warpath against the world’s top tennis player. As a result, when the Serbian player arrived, he was promptly detained by immigration authorities, who noted that the type of visa he had applied for didn’t allow for medical exemptions. After a night of arguing with authorities, Djokovic — who is tied with Roger Federer and Rafael Nadal for the most Grand Slam wins of any male player in history, and who was predicted by many to win the Australian Open and break the tie — was unceremoniously carted off to a detention center and locked up in a room with several other detainees.

The hotel-cum-jail that Djokovic ended up in housed several dozen would-be refugees and asylum seekers caught up in Australia’s notoriously harsh immigration detention system. Nine years ago, the current Liberal-National governing coalition got elected on a “stopping the boats” anti-immigration policy, implementing Operation Sovereign Borders to repel boatloads of refugees. Soon afterwards, it began locking up would-be immigrants in off-shore detention sites on the islands of Nauru and Papua New Guinea, and only reluctantly let some onto mainland Australian soil when they were too sick to be kept in the island detention fortresses any longer. Once in Australia, they were housed in overcrowded and under-resourced privately run “hotels” for years at a stretch. Some of those with whom Djokovic was detained have been held for up to nine years, since the earliest days of Operation Sovereign Borders.

Djokovic spent the weekend in the Park Hotel detention center, in a suburb of Melbourne. Those incarcerated in the detention center have to ask permission to use the bathroom, and are shackled before being moved from one part of the facility to another. They are provided with such low caloric intake that human rights activists say the food regimen amounts to near-starvation conditions — and what food there is, critics say, is sometimes filled with maggots. Sick people incarcerated at the Park Hotel continue to be provided with deeply substandard medical care despite a series of lawsuits against the agencies responsible for maintaining services in the detention sites. Djokovic’s parents, in a series of broadsides, accused the authorities of torturing him.

On Monday, a judge ordered his release, and, in a scathing rebuke of the government, announced that Djokovic had abided by all the requirements to secure an exemption — including providing proof that he had recently tested positive for COVID — and that he should, therefore, be allowed to stay in the country.

Despite it being late at night, the tennis player, famed for his focus and will to win, immediately headed to the practice courts.

But, in the days since, a barrage of revelations has shattered Djokovic’s reputation and given Australia’s immigration minister, Alex Hawke, an opening to once more seek to deport the sports megastar. The German daily newspaper Der Spiegel published an investigation casting doubt on the authenticity and date of Djokovic’s supposed positive COVID test on December 16. The investigation suggested that the data had been manipulated in order to give Djokovic cover for claiming a medical exemption, open to people recently infected with, and recovered from, COVID that he otherwise would not have had access to. In quick succession, it also turned out that Djokovic had attended several indoor, unmasked events shortly after supposedly testing positive, and that he had also given an interview to a French sports journalist without letting the journalist know that he had an active case of COVID.

Damned if he did, damned if he didn’t. Djokovic either conjured up a fake-positive test result to game the Australian immigration system, or he genuinely tested positive and didn’t care enough to abide by basic quarantine restrictions that have been in place the world over for the past two years.

Making matters worse, it then turned out that Djokovic’s immigration forms contained a bald-faced lie. Someone on his team had ticked that he hadn’t traveled anywhere other than Spain in the 14 days prior to boarding a flight from Spain, via Dubai, to Melbourne. In fact, numerous photos soon circulated showing that the tennis superstar had also been in Serbia during this time, where he had attended a series of high-profile ceremonies in his honor. Djokovic put out a perfunctory apology on Instagram, saying his team member had simply made an honest mistake in filling out the form wrong. But the damage was done: Lying on immigration paperwork is grounds both for deportation and also imprisonment.

As I write this, on Friday morning California time, with less than three days left before play begins at the Australian Open, Hawke has once more revoked Djokovic’s visa, and the tennis star, seeded number one in the upcoming championships, has agreed to surrender for further questioning on Saturday morning. Barring another extraordinary twist in the legal saga, Djokovic will be unable to play in the event.

If and when “No-Vax” Djokovic is expelled from Australia, he will have no one to blame but himself. It’s a tennis tragedy with more than an absurdist tinge to it.

Meanwhile, thousands of would-be refugees and asylum seekers continue to be held in appalling conditions in Nauru, in Papua New Guinea and in Australia itself in hotels such as the Park. Their stories are the true stories of injustice, and the conditions they are held in for years at a stretch, as a result of the Australian government’s embrace of harsh anti-immigration measures, are a human rights violation that deserves the world’s attention.