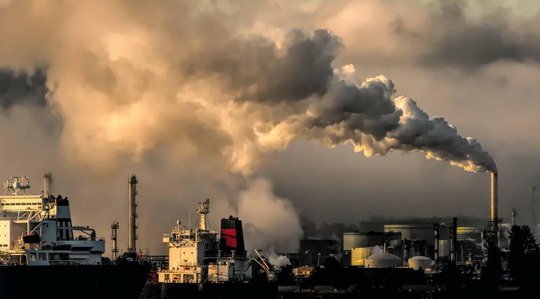 Most recently, 100 mph winds swept grass-fires through Colorado, leaving thousands homeless. It was 116 degrees here in Portland last summer, as wildfires and drought ravage the West. The Gulf Coast, South and Eastern Seaboard are now annually torn apart by superstorms, while the Midwest faces mile-wide tornadoes never before seen with this ferocity and frequency.

Climate change has gone from the theoretical to slapping us in the face.

From drought and fires that killed hundreds in California, to massive tornadoes ripping apart Kentucky, to sea-level rise and flooding cities, America is being hammered and Americans are dying. Right now.

And it’s expensive. Individual families (and their insurance companies) are bearing the brunt of the burden right now, but as climate disasters continue to scale up it’s going to not only cost more and more American homes and lives, it’s also already costing the country hundreds of billions — soon to be trillions — every year.

So, who’s going to pay for this?

If an arsonist lit your house on fire, in addition to sending him to jail you could also sue his estate for damages.

In this case, we have corporations and individuals who intentionally lied to us for half a century about the impact of their fossil fuels on global warming just to enrich themselves.

Now they’re standing back with their hands in their pockets shrugging and whistling while people die and our homes are frozen, flooded or destroyed by tornadoes.

Those who perpetrated the lies that led to this must be held to account, both financially and with the force of criminal law.

On top of that, now that climate change is here and walloping us, we must harden our nation’s infrastructure and relocate both vulnerable people and those who lost their homes and communities to wild weather, drought, and floods.

Shouldn’t the fossil fuel companies and the millionaires and billionaires they’ve created pick up that bill, too?

We’ve been having a similar conversation around other 20th century corporate crime for decades, and generally we’ve screwed it up.

America is pock-marked with mansions and estates owned by families enjoying multi-generational wealth that came from their ancestors or parents lying to the American government and the public in ways that killed people.

For example, in 1943 Samac Laboratory told the nation’s largest asbestos producer, Johns-Manville, that asbestos exposure definitely and predictably caused the excruciatingly painful and always-fatal lung cancer called mesothelioma. The company’s executives made the corporate decision to cover the science up and then lied about it to their employees, customers and the government for two generations.

That was eight years before my father dropped out of college in 1950 and went to work in a Grand Rapids steel mill because Mom got pregnant with me; he was surrounded every day with a cloud of asbestos dust that his bosses told him was “safe.” Dad died of mesothelioma in 2006.

One of the best known of the many fabulously rich heirs to the Manville fortune was Tommy Manville, who became famous for marrying eleven blonde 20-something showgirls thirteen times. Seriously. The first paragraph of his obituary in The New York Times reads: “Tommy Manville, who took 11 wives in 13 marriages and was heir to the Johns-Manville asbestos fortune, died of a heart attack yesterday at his estate in Chappaqua, N.Y. He was 73 years old.”

To this day, no asbestos fortunes have been attached and none of the criminal liars went to prison: we missed that opportunity a generation ago.

Similarly, thousands of million-dollar estates across our country are owned by heirs or current executives of the tobacco industry, which also knew their product killed Americans and lied to us. We missed that chance to do right, too: none of these wealthy executives have ever gone to prison, even though their product continues to kill hundreds of thousands of Americans every year.

When it finally came out a few years ago that Roundup causes cancer, none of the multimillionaire heirs to the Monsanto fortune lost their mansions and none of Monsanto’s executives went to jail.

Neither did the owners of chemical companies that left behind deadly Superfund sites like the one that caused birth defects and stillbirths at Love Canal; others do so to this day across the nation.

When it came out that the Sackler family decided to lie that their new Oxycontin drug was less addictive than normal opioids they walked away with billions; none have seen the inside of a jail cell for even an hour.

Owners and operators of mining operations across the country lied to communities for generations that they’d clean up their poisonous waste: instead, they routinely bankrupt their companies and walk away with millions, leaving behind moonscape-like devastation.

Even banksters like “Foreclosure King” Steve Mnuchin, who reveled in “earning” around $200 million by throwing over 36,000 of California families out of their homes while his Wall Street buddies stole trillions of dollars, continues to troll us with his twitter pontifications like he’s some kind of elder statesman worthy of our respect.

As Honoré de Balzac noted in 1834 (in slightly less compressed language), “Behind every great fortune lies a great crime”:

# — Americans are quick to forget about the families of the thousands of small businessmen John D. Rockefeller destroyed before Congress outlawed and Teddy Roosevelt broke up his predatory monopoly.

# — Seven tobacco CEOs lied to Congress and took home millions in bonuses; their families are still morbidly rich and their children and grandchildren are the toast of high society.

# — Defense contractors take over half of our Pentagon budget and steal billions from us every year; their mansions, complete with servants’ quarters and riding stables, still ring Washington, DC. and we haven’t literally never been able to successfully audit them.

Historically, the only corporate criminals we hold to account are those who rip off rich people: Ken Lay, for example, defrauding his Enron investors, and Bernie Madoff scammed millions from Wall Street oligarchs.

On the other hand, if you can make billions exploiting, poisoning, misinforming, or ripping off working-class Americans you’re generally guaranteed a soft landing.

We have to change the rules.

Fossil fuel companies have known for two generations that their products would at the least disrupt society and at worst produce a great extinction on the order of what killed off the dinosaurs.

Not only did they cover it up: they actively funded climate change “disinformation” campaigns with front groups and bought-off scientists openly lying in the press and before Congress.

And now, like with asbestos, tobacco, and dozens of other known-as-deadly products, the bill is coming due.

In the face of this fossil-fueled climate change we need immediate and expensive action: America needs to harden its infrastructure, and fast.

If high-tension power lines had been buried underground in California and Colorado, for example, the worst of the wildfires would have been avoided, as they were caused by wind-downed wires.

Cities from Miami to New York are regularly crippled by sea-level-rise flooding and therefore must spend hundreds of billions on levees, pumps and reconfiguring water, power, mass transit, and sewage systems.

So many American homes have been destroyed by global-warming-worsened fires and freezes (see: “Texas”) that building materials have exploded in price and fireproof “intumescent” house paint is the hot new product.

The bad guys should be paying for this. We’ve certainly established a legal framework for it.

Before my dad died, he joined an asbestos lawsuit that, after lawyer fees, got his estate around $40,000 which eased life for my mom. Similarly, states have received compensation from tobacco companies for their costs treating lung cancers and the federal government steps in to remediate old mines and superfund sites.

While the majority of people injured by the kind of raw capitalism we practice in this country never see a penny, there is precedent for holding lying industries responsible for the harms they intentionally and knowingly cause.

At the very least, this could take the form of a carbon tax, with the revenue going to reimburse victims and harden our infrastructure.

But given how egregious these companies have behaved — and how many are still, to this day, funding climate denial and lobbying against green energy — Congress should extract restitution and recompense from the companies and punish the psychopathic executives who oversaw their campaigns of deadly lies.

This goes way beyond garden variety crime, even dwarfing the damage caused by asbestos or tobacco. These are quite literally crimes against the American people and crimes against our larger humanity.

It’s time to hold the perpetrators to account and make them pay.

Photo by Chris LeBoutillier on Unsplash

Photo by Chris LeBoutillier on Unsplash