Whilst it is impossible to collect precise statistics on homelessness, these widely available figures, which exclude the ‘hidden homeless’, paint a stark picture of the growing crisis: In 2010 1,768 people were recorded as sleeping rough, whilst 48,000 households were living in temporary accommodation. By December 2017, according to A Public Accounts Committee report, there were almost 9,000 rough sleepers, and, The Guardian states, “nearly 76,000 households were living in emergency temporary accommodation such as bed and breakfasts, of which 60,000 were families with children or pregnant mothers” – an increase of 58% on the 2010 figures.

Whilst someone rough sleeping in a doorway is a loud and painful declaration of homelessness, a person is also regarded as homeless if they are staying with family or friends or ‘sofa surfing’ (the ‘hidden homeless’), as well those living in temporary accommodation provided by a local authority. Councils have a legal duty to house certain people – such as pregnant women, parents with dependent children and people considered vulnerable (single people rarely qualify). If, after investigating a case, the council concludes they do not have a legal duty to provide housing, nothing permanent is offered and the temporary accommodation is withdrawn. The only option then is to find somewhere in the private sector, which is becoming increasingly difficult in many parts of the country, including rural towns as well as London and other major cities. Rents (and deposits) are high and landlords are more and more demanding, refusing to rent to people on state benefits, often asking for a guarantor and only offering Assured Shorthold Tenancies (AST).

The Thatcher government introduced AST’s as part of the Housing Act of 1988, prior to which fair rents (as opposed to market rents) and protected tenancies existed, providing a high level of security of tenure. The Thatcher legislation changed all that; AST’s (usually six months) provide virtually no security to the tenant and, in line with the maxim of the market, set no limit on the level of the rent. Consequentially most landlords charge as much as they can get, many do not properly maintain the property, and are within their rights to raise rents and take possession of the property whenever they feel like it. The ending of an AST is now one of the most common causes of homelessness. 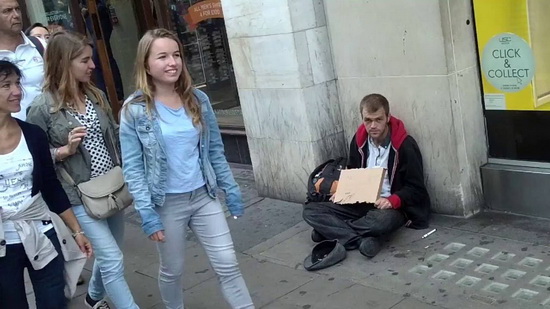 Those in receipt of state benefits or on a low income can claim housing benefit (HB), which is paid by local authorities to help with rent payments. In 2010, shocked by the national HB bill, the coalition government initiated reforms to the Local Housing Allowance (LHA) for tenants in ‘the deregulated private rented sector’ – the key word here is deregulated. Within broader public spending cuts the policy changes set a cap on the level of housing benefit that can be paid. LHA levels are fixed well below market rents, which results in shortfalls in rent payments leading to arrears, subsequent evictions and homelessness; according to the homeless charity Crisis, “all available evidence points to Local Housing Allowance reforms as a major driver of [the] association between loss of private tenancies and homelessness”

Instead of taking measures to regulate the private housing market and deal with the extortionate rents charged by greedy landlords, the policy penalized the tenant and set in motion a system which, coupled with benefit freezes and the dire lack of social housing, has caused homelessness to grow at an alarming rate; Another example of government incompetence or social hardship by design? If the HB freeze remains in place until 2020 as planned by the government, the charity, Shelter says that “more than a million households, including 375,000 with at least one person in work, could be forced out of their homes.”

The cap on HB is one aspect of the government’s austere economic programme. Through the implementation of economic austerity the Conservative government is waging a violent assault on the poorest members of British society and ripping the heart out of the community. The justification for such brutality is the need to ‘balance the books’, however, the national debt is greater now that is was in 2010, The Office for National Statistics states that “UK government gross debt as of December 2017 was £1.7 trillion – equivalent to 87.7% of gross domestic product (GDP),” – compared to 60% of GDP in 2010. Austerity is an ideological choice not an economic necessity. Financial cuts have been applied in the most severe manner; budgets to local authorities, schools, the NHS (National Health Service), the Police and to the benefit system, among other areas. The consequences are homelessness and widespread economic hardship.

Nationwide food-banks run by the Trussell Trust provided 1.3 million food parcels last year, up 13% on 2016 – before the financial crash in 2008/9 the concept of “food banks” was virtually unknown in Britain. Shelter estimates that more than 130,000 homeless children will be living in temporary accommodation over Christmas, almost 10,000 of who will be in hostels or hotels “where in many cases their family will have been put up in a single room, sharing bathrooms and kitchens with other residents. Overall, 50,000 more children in England, Wales and Scotland are homeless compared with five years ago, a rise of 59%.” The government is doing nothing to alleviate the homeless crisis, on the contrary their policies are fuelling it; Labour MP Meg Hillier, who chairs the Public Accounts Committee, says the government’s approach to tackling the problem of homelessness has been an “abject failure”.

The right to a home 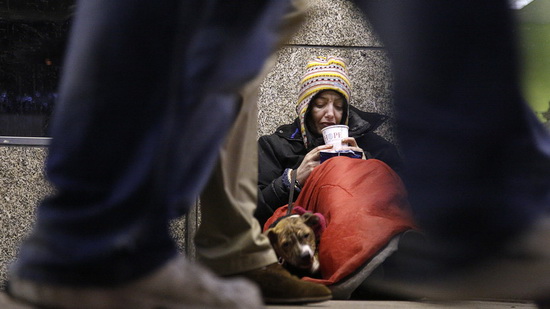 Homelessness is one of the most destabilizing and painful experiences anyone can go through. It fuels psychological and physiological insecurity, places a person in situations of physical danger, erodes any positive sense of self and causes physical and mental health illness; Crisis records that 46% of homeless people suffer from a mental health illness compared to 25% of the general public; and while this figure is itself extremely high, when asked, a staggering 86% of people who are homeless report suffering from one or other mental health illness. Perhaps unsurprisingly, research shows “that as a person’s housing becomes more stable the rate of serious mental illness decreases.”

Rough sleepers and people begging for money are routinely ignored and treated with disdain, police are instructed to move beggars on and so erase images of social hardship from the gentrified streets – it’s bad for the cities image – and hostile architecture makes even rough sleeping difficult. Shelter relate that the three main reasons for becoming homeless are: “parents, friends or relatives unwilling or unable to continue to accommodate them; relationship breakdown, including domestic violence and loss of an Assured Shorthold Tenancy.” These are causes that anyone could be the victim of, they should not result in homelessness, indeed within a healthy, compassionately organized socio-economic order, homelessness would not exist at all.

Housing, like education and health care, should be safeguarded from the Madness of the Market; limits should be placed on the rents that private landlords can charge, and a nationwide building program of social housing initiated under the stewardship of local councils, not housing associations. At the same time tenancies need to be lengthened, tenants’ rights strengthened, and fair rents re-introduced.

A house or flat is a home, and a home is a basic human right – enshrined as such within that triumph of humanity, the Universal Declaration of Human Rights: it is not and should not be regarded as a financial investment. At the root of the ‘housing crisis’ in Britain and elsewhere is the poison of commodification; whether it be a house or a forest, a school playground, library building or a public park, all are regarded in monetary terms, how much is it ‘worth’ – meaning how much is anyone willing to pay for it. The result is the commercialization of all areas of life including housing, and the promotion of an ugly way of life rooted in material greed and financial profit, no matter the impact on people or the natural environment.

This ideologically rooted approach to life is at the heart of many if not all of our problems, including the most pressing issue of the time, the environmental catastrophe. Government policies consistently add fuel to the fires, politicians lack vision and imagination, but it is the socio-economic ideology that underlies and fashions policy that is the problem; the system and the values it promotes need to be fundamentally changed, and a new order introduced that cultivates social justice, cooperation and tolerance.