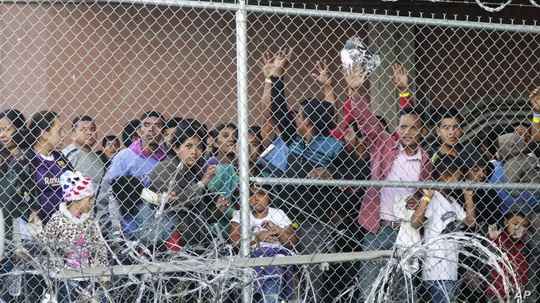 As Wall Street, the political establishment and corporate media celebrate Joe Biden’s pledge to bring about a “return to normalcy,” the US government is committing a social crime of unprecedented dimensions against thousands of immigrant children at the US-Mexico border. On any given night this week, over 3,200 immigrant children were sleeping on cold cement slabs under police floodlights, far from their parents and their homes. Nearly 1,400 children—many younger than 13—have been jailed for over three days in blatant violation of US law, held in cages that immigrants refer to as “ice boxes” or “dog kennels.” 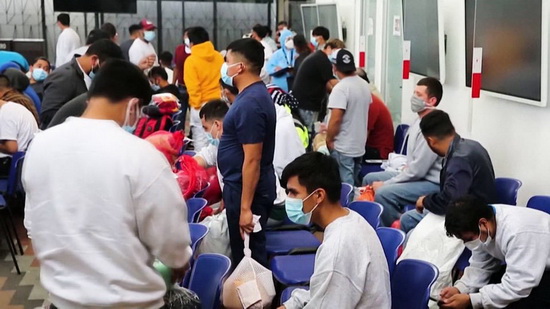 In the midst of a deadly pandemic, crowded tent camps set up by the previous Trump administration are now full to capacity. The number of children presently detained is 25 percent higher than at the peak of the Trump administration’s 2019 crackdown on immigrant children.

More than 10,000 immigrant children have been detained in the weeks since Biden declared at his inauguration that his administration would “restore the soul of America” and “make America, once again, the leading force for good in the world.”

This ongoing crime exposes the rot at the core of the entire capitalist system and all its institutions and political representatives, from right to so-called left.

Republican Representative Liz Cheney, a media favorite for her “responsible” criticisms of Trump, scapegoated immigrant children for the coronavirus and blamed Democrats for “deciding to open the border and to let in thousands of people, potentially, who have got COVID.” Texas Republican Governor Greg Abbott, who just ordered all schools and businesses to open and repealed the state’s mask mandate, said officials “refused to test” immigrant children and “put these people on buses and sent them” across the country to spread the disease.

The Democratic-controlled Senate and House have refused to even convene hearings to address the mass detention of immigrant children. The Washington Post, owned by Amazon CEO Jeff Bezos and supportive of the Democratic Party, published an editorial board statement March 7 calling the mass detentions “a humane and decent approach” to address what it called the “surge of illegal border crossings.”

Biden’s attack on immigrant children exposes the cynical role of the Democratic Socialists of America (DSA), whose leading representatives urged workers and youth to vote for Biden as the “lesser evil” and now justify his actions.

In 2019, Alexandria Ocasio-Cortez traveled to the border for a photo-op and wept in front of what turned out to be an empty parking lot. But now that a Democrat occupies the White House, Ocasio-Cortez justifies child detention. On February 23, she refused to call for closing the concentration camps, instead saying they should be “licensed” and there should be oversight of “contracting” the operation of what she cryptically called “influx facilities.”

The DSA-aligned Jacobin magazine similarly published an article February 10 praising the Biden administration for repealing Trump-era immigration restrictions, claiming “even for the most cynical leftist, there’s a lot to like in the Biden agenda so far.”

The proponents of racial and gender politics are also silent on the crimes being carried out at the border. The fact that the head of the Department of Homeland Security is a Latino immigrant has not improved the fate of detained immigrant children, nor has the fact that the acting head of Immigration and Customs Enforcement (ICE) happens to be black.

The New York Times opinion section—the moral compass of the affluent upper-middle class—has not published any recent statement on the matter, though it has featured numerous articles promoting racial politics and moralizing about the alleged transgressions of New York Governor Andrew Cuomo.

The hundreds of thousands of Central American immigrants of all ages who are presently seeking admission to the US are fleeing countries devastated by decades of crimes carried out by US imperialism.

Perhaps no active American politician is as personally complicit in these crimes as Biden himself. After US-backed dictators killed hundreds of thousands of peasants and workers in a wave of reactionary violence throughout the 1970s and 1980s, Biden became the self-proclaimed architect of Plan Colombia, a brutal militarization campaign carried out by the Clinton, Bush and Obama administrations. In January 2020, Biden bragged, “I’m the guy who put together Plan Colombia.”

Under the program, the US poured billions of dollars into arming and training the Colombian military, which made seven million Colombians homeless and from 2003 to 2007 killed thousands of civilians, falsely claiming they were guerrilla soldiers in the “false positives” scandal.

Plan Colombia was combined with a brutal regime of IMF-backed austerity measures that slashed pensions and wages and transformed Colombia into one of the world’s most unequal countries. Drug production only increased, fueling violence and strengthening gangs throughout the Central American and Mexican trafficking routes.

This became the model, and then-Vice President Biden oversaw similar policies across Central America in the mid 2010s, when the US deployed $750 million to train and arm the militaries and death squads of US-backed regimes in Honduras (where the Obama-Biden administration carried out a coup in 2009), Guatemala and El Salvador.

The numeric strength of the flow of immigrants testifies not only to the historic destruction of Latin America by US imperialism, but also the catastrophic response of the global ruling class to the coronavirus pandemic, which has hit Latin America harder than any other region in the world.

Though Latin America contains only eight percent of the world’s population, it accounts for a third of COVID-19 deaths—over 750,000 people. In Central America, food prices are soaring as a result of the pandemic and last year’s hurricanes, and severe hunger and even starvation is a reality for millions. Mass unemployment is coupled with a near total lack of social support for workers, farmers and small business owners.

For months, the American pharmaceutical corporation Pfizer has been extorting Latin American governments, refusing to sell vaccines unless they put up embassy buildings and other sovereign assets as collateral, leading to a three-month delay in vaccine deployment, according to a report by the Bureau of Investigative Journalism.

The desperate exodus from Central America is a sign that social tensions across the world are at the breaking point.

In the January/February edition of Foreign Affairs, former Colombian Ambassador to the US Luis Alberto Moreno points to the mass protests that swept Latin America in 2018 and 2019 and warns of the consequences of the coronavirus pandemic on the consciousness of masses of people:

If nothing is done, Latin America will become an even greater source of instability, from which no one—neither its elites nor the United States—will be immune. The idea of a stagnant region awash in street protests, political instability, and organized crime is not some nightmarish vision of a lost decade ahead; it is the reality many Latin American countries are now confronting.

In other countries, the protests have died down, but most observers believe that is mainly because of the need for social distancing due to COVID-19. Indeed, the pandemic may have cooled the protests in the short term, but observers expect that over time, it will make the underlying grievances, and the pervasive inequality itself, dramatically worse.

Aware of profound social anger over inequality and death and fighting desperately to maintain its privileged position under capitalism, the financial aristocracy is attempting to scapegoat immigrant children for the mass deaths that are a deliberate outcome of the ruling class’s own parasitic policy.

Only a class that lives as a cancer on society could make such depraved arguments. The international working class must activate its profound social power and transform society on an egalitarian socialist basis. This requires the conscious political struggle for the unity of workers of all races and nationalities, regardless of immigration status.