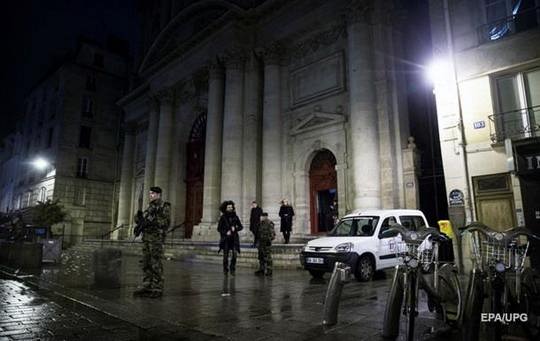 What started as a show of support for three injured emergency responders in Corsica on Christmas Day escalated into a violent attack on a Muslim prayer room, where angry protesters attempted to burn Qur'ans and prayer books.

Around 150 people gathered in front of police headquarters in Ajaccio, the French island's capital city, in solidarity with the two firefighters and police officer who were reportedly «ambushed» by «several hooded youths» the previous night in a housing project in Jardins de L'Empereur, a low-income neighborhood. But then many of those showing solidarity broke away and headed towards the housing project where the previous night's events had unfolded. An AFP correspondent reported that the crowd was about 600 strong, with protesters shouting: "Arabs get out! and «This is our home.» Many residents of the area are Muslim immigrants from Arab nations, in many cases former French colonies.

Officials said «several dozen» protesters broke away from the main group and made their way to a nearby Muslim prayer room, where they smashed through the glass door, threw objects around, and set holy books on fire.

«50 prayer books were thrown out on the street,» regional official François Lalanne said on Saturday, noting that many of the pages were burnt. 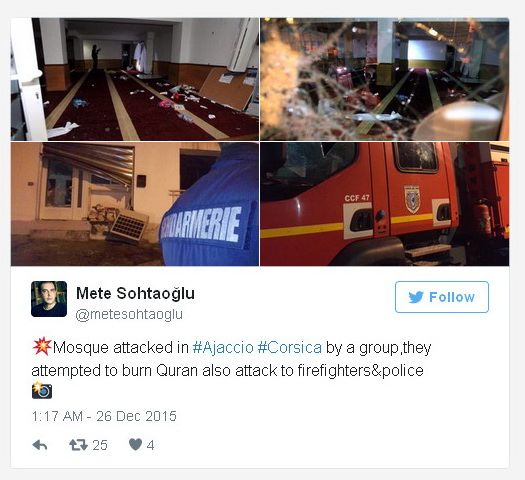 Following Friday's violence, prayer rooms and mosques in Ajaccio will be guarded by the city's police. Prefect Christophe Mirmand, the highest authority representing the central government on the island, condemned the vandalism, and said that two separate investigations were opened – one into Thursday's ambush on emergency personnel, and one into the violence in the prayer room. Mirmand said that police reinforcements from mainland France were being called into Corsica.

Around 120,000 French police and armed forces were reportedly deployed on Christmas Eve and Christmas Day throughout the nation as additional security due to the risk of attacks by Islamist extremists.

In an appearance on a French TV station, Dali Boubakeur, the rector of the Grand Mosque of Paris, called for «calm and cool heads», saying that the Corsica events had «saddened him.»

The attacks coincided with both Christmas Day and the Muslim feast day commemorating the birth of the Prophet Muhammad. The French Council of the Muslim Faith condemned the violence, expressing its sadness that it took place on «a day of prayer for both Muslims and Christians.»

Earlier this month, the far-right, anti-immigrant National Front made huge gains in the first round of voting in regional elections on the French Mediterranean island, garnering more than 10 percent of votes and four seats in the regional assembly.

While xenophobia and Islamaphobia has recently been surging across Europe in the wake of the Islamic-state claimed attacks on Paris, Corsica is historically no stranger to anti-Arab and anti-Muslim sentiment.

The island's nationalism has long been bubbling under the surface, which the growing Arab population – predominantly expats from Morocco – has become a victim of. Ten years ago, officials found that racist graffiti, homemade bombs and car burnings were increasingly racially motivated and directed towards Arabs.

In June, a Corsican elementary school had to cancel a children's fete when parents learned that pupils were going to sing verses of John Lennon's famous pacifist song «Imagine» in Arabic. Angry parents threatened to disrupt the event, and the school building was marred with graffiti reading «Arabs Out!» in Corsican.

The National Front called the anti-Muslim incidents Saturday in Ajaccio «inacceptable» in a statement on its site, but added they are the consequence of «a policy of ... weakness» by national authorities in the face of «no-go zones» where criminals, according to the statement, run free and animosity with local populations is high.