A nation that claims to be a force for good should not need 800 military bases around the world to corroborate that claim. 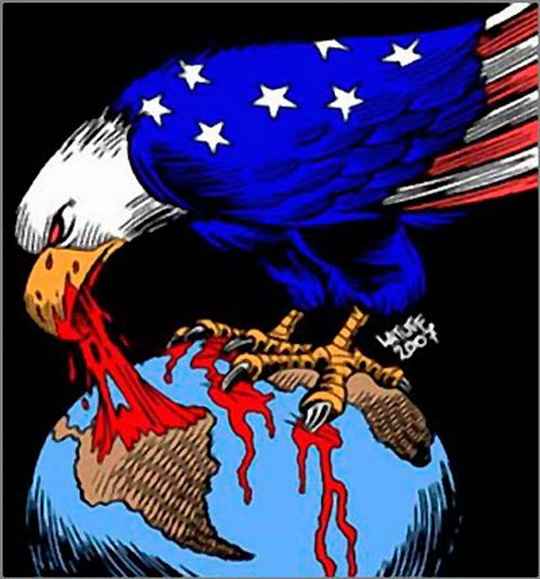 In America’s dealing with a world of invented enemies, lies, racism and perpetual wars have morphed into a tricephalic creature requiring uncommon intellectual labors to dissect and isolate the individual elements, with a view to degrading them. American strategies for battling others, especially people of color, have employed a varied mix of these components. To build a culture of war on the weak, patronizing racist rationales — which themselves are falsehoods — are invoked. Addiction to war and an attendant indifference to peace requires an unremitting turnover of enemies, to attract piles of cash to feed the insatiable merchants of death. Racism has fueled violence against diverse nations and peoples through much of American history.

Lies precede virtually all American-initiated wars invoking hackneyed clichés of freedom, human rights, the rule of law, protecting locals against tyrants promoting democracy, on occasion playing victim of imagined threats depending on the demands of given circumstances. The clichés are shamelessly employed as the Empire props tyrants, head chopping monarchs while ensuring an adequate supply of false pretexts to fight endless wars. Racism itself is as vicious a lie as it is an addiction . It is systemic. Victims of racism suffer abuses, torment and slayings founded on yet other lies: exceptionalism and ostensible superiority of the perpetrators versus the perceived inferiority of sufferers callously excluded from the community of normal human beings. It is an internalization of a revolting god complex seeking to reinvent humans whose immaculate origins require no uninvited human intervention.

“Racism has fueled violence against diverse nations and peoples through much of American history.”

But given that millions have been and continue to be targets and victims of this outrage, the phenomenon can no longer be divorced from national security. A simple cell phone, Huawei, is being elevated to a national security threat without a scintilla of evidence and where not a single fatality has been documented from this marvel of Chinese business acumen. This coming from the world’s leading surveillance scoundrel is a distraction bordering on the absurd. The time has come for a new concerted campaign against this beast in order to save lives at home and overseas and to provide a moral and civilized framework for the conduct of domestic and international affairs. The crusade must go beyond classic civil rights marches, with marchers locking arms and singing “We shall overcome.” The ailment is systemic and measures to stem its progression must be decisive. Whitewashed and sanitized history must be purged from schools and minority historians must take control of relating their own story not simply to their own people but to the whole country. The history of the United States is not the exclusive history of White America.

Such a campaign nonetheless deserves much better than the current crop of African American leaders, whose functions have been reduced to the occasional noises made following the murder of unarmed people of color by White cops. When virtually the entire Black Congressional Caucus is deep in the pockets of the Israeli lobby , a lifeline of the last surviving apartheid state, they cannot lead the fight against addiction to systemic racism, war and lying.

“The crusade must go beyond classic civil rights marches.”

Psychological manifestations of racism, deception and war mongering exhibit substantial overlap with those of chemical dependencies. An abrupt change in mood occurs afterthe offending substance is consumed. Withdrawal of the substance intensifies altered mental states. In racist maladies the symptoms become exacerbated when victims resist their exploitation just like the restiveness displayed during rare intervals of peace. They co-manifest with denials and excuses.

The deceased leader of Venezuela, Hugo Chávez was labeled “el negro ,” the black one, as a ploy to move voters away from him. That ruse had the exact opposite effect. There is little mention in the selective racist MSM that a driving force behind the current fake Venezuelan coup driven by Washington is White supremacy . Washington’s puppet, Guaido and his trusted thugs, have been embezzling funds intended to relieve the suffering of his countrymen. There’s no coincidence in making an Israel Firster, Elliott Abrams as Special Envoy to Venezuela; a racist government appointing a fellow racist to put racist elites in power. Abrams’ illustrious career peaked with the defeat of his Nicaraguan Contras despite throwing his weight behind that reactionary group of mercenaries and the notorious Iran Contra scandal . Bear in mind over 60% of Venezuelans self-identify as mestizos or mixed race, 6.4% as of African and Amerindian lineage. In true racist fashion, self-fulfilling prophesies and victim blaming are never in short supply.

“The struggle for paqce deserves much better than the current crop of African American leaders,”

Addiction to war manifests itself in the failure of perpetrators to cease rationalizing, to keep the racist head of the beast alive. After WWII, America has earned for itself the dubious distinction of killing more innocents in unprovoked wars of aggression than the rest of the world combined. Add to that the use of Agent Orange in Vietnam. America sold Saddam Hussein the chemicals used against Iranians, before they turned on their former puppet. Willful amnesia, goes hand in hand with the lies fabricated to launch these wars with Obama and the sadistic Pompeo quick to point fingers at Assad of Syria for gassing his people when he was winning his war against ISIS and Al Qaeda, an allegation later proven to be false . When a nation’s leaders no longer recognize civilized behaviors as the preferred course for conflict resolution, resorting instead to starvation of entire populations, economic and murderous wars, it is time for varied rehab measures to be inaugurated,this being one of many. The succession of lies currently used in preparation for a war against Iran are dismantled as quickly as they emerge . And to sustain imperial lies, the US blocked Iran from presenting evidence of a downed droned inside her territorial waters at the UN Security Council. Naturally.

Not unlike individual or substance abuse, colonial and racist wars have left lasting scars in their wake — individual and collective, in internal and external victims, witness the world’s highest suicide rates among veterans of America’s criminal wars. Denials co-expressed as withdrawal symptoms as in substance abuse have showed bizarre extensions abroad aided by political correctness at home. Invading racist American forces in Iraq routinely labeled their victims “ragheads,” “camel jockeys,” “Jihadi John “and “sand niggers” opening doors to Iraqi abuses, with the culprits receiving no more than a slap on the wrist, as happened in Abu Ghraib and Fallujah. To do this at home would be to invite fake and feeble reprimands because bigotry no longer needs linguistic tools to prop its abuses. The modern variety of organized racism is about nourishing unequal opportunity in education, health care, employment, mortgage lending and blaming the victim for good measure, without resort to legal sanctioning. Fake civil rights legislation makes the quest for justice a daunting one, the onus of proof lying squarely with the dispossessed and disenfranchised. A nonviolent revolution is long overdue.

“A driving force behind the current fake Venezuelan coup driven by Washington is White supremacy.”

Religion has been thrown into the mix; scriptures become ready and convenient sources for justifying slavery and racism in the American South , South African apartheid and presently Israeli apartheid , where racism still remains the formal, overt policy of one of the world’s remaining tribal nations. Spain went after gold, but flags bearing crosses were at the frontlines of their genocidal undertakings; in the words of Cortez’s gang of conquistadors, they went to the New World to “serve God, and to get rich as all men want to do.” Reliance on scripture allows individuals the luxury of serenely indulging in their rituals while meting out abuses to their victims without remorse, naively believing that they are currying favor with their racist maker in the process. Religion was turned on its headwith men unwittingly recreating their maker in their own image on their way to reinventing fellow humans.

In their day, such monstrous policies received tacit support from fellow racist countries, a number of whom between them had carved up much of the planet for their colonial quests of rape, plunder, slavery and genocide. It was a multinational undertaking where the debasing of humans was normalized before subduing or altogether doing away with them. The aftermath of racist exploitations remains to this day, if the resulting economic inequities, the number of failed states and the increasing dependency on former colonial masters, especially in Africa, is anything to go by.

“Religion was turned on its head.”

Few other societies demonstrate this fact more vividly than in Africa where 52 of 54 sovereign states are part of a military collaboration (AFRICOM ) with, and totally controlled by, the US. Britain in its imperial heyday, went a step further to swell the rationale for colonialism to include civilization, Christianity and commerce. The first president of Kenya, Jomo Kenyatta famously said that the White man came to Africa holding the bible in one hand and a gun in the other. Colonialists instructed Africans to close their eyes. Lo and behold! When they opened them, their most productive agricultural land was appropriated by their uninvited colonizers and ostensibly named the “White Highlands.”

Parallel feelings of shame and guilt among subjects of substance abuse are also displayed by war addicts. In unison some that had applauded the Iraq war, labeled it a “mistake .” The typical newspeak left out a stark, horrid fact of that racist war: it was a one-million-dead-4-million-exiled “mistake.” That depiction is intended as a palliative and veiled guilt while the Empire readies itself for the next assault. Crimes against humanity become regularized. Justice will never be served and Iraqi society will have to pick the pieces on their own. Meanwhile, their racist invaders are busy planning the next round of colossal war crimes for which they will absolve themselves yet again, to enjoy the wages of impunity that the racist cartel bestows on its members.

The hallucinations of substance abuse and addiction find analogous expression in racist warmongering. They relate to the principles that constitute the building blocks of a racist imperial edifice: Manifest Destiny and American exceptionalism. Both these deluded ideologies mutually reinforce the notion of superiority of self in sync with the inferiority of the Other. Manifest Destiny carried with it the idea of divine sanction and exceptionalism the delusion of not simply American uniqueness, but WhiteAmerican. These ideologies inspired Hitler in his own delusions of Aryan exceptionalism. The Nazis did indeed love America, but only that of their kinsfolk over one of people of color. A nation that claims to be a force for good should not need 800 military bases around the world to corroborate that claim.

Racism as an issue of national security and a social ill is not incurable for those recognizing it for what it is: an addiction and a pathology. Given the recalcitrant and complex nature of an updated version of organized bigotry, visionary leaders must vigorously pursue serious attacks as a new, unforgiving civil and human rights campaign. Lingering racist manifestations at home continue to thrive and pose newer challenges for an effective resistance movement. The racist impulse abroad will likely present yet greater challenges. Those at the forefront of such campaigns must be informed, dignified, transparent, educated, possess integrity and a clear vision that demonstrates thorough familiarity with the roots of the ongoing afflictions they endure. Addiction to lies, war, hegemonic dreams, ethnic pride are at stake for the perpetrators. They afflict past certified racist presidents (Bush, Trump) or cowards (Obama). The assault must take aim, doggedly and fearlessly attack the root of the problem.